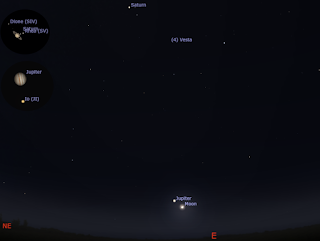 Evening sky on Monday August 15 as seen from Adelaide at 22:00 am ACST. Saturn is at opposition, when it is biggest and brightest as seen from Earth. Saturn also forms a triangle with delta and gamma Capricornii. Jupiter is just above the horizon and is within binocular distance of the waning Moon.

The insets are the telescopic views of Saturn and Jupiter at the same magnification at this time.

The August edition of Southern Skywatch is now up (sorry about the delay, life happened). The planetary action is in the morning and evening skies with four bright planets, Saturn, Jupiter, Mars, Venus, and Mercury in the morning sky. Saturn is at opposition, when it is biggest and brightest as seen from Earth, Jupiter clims higher in the evening sky and Mercury is at its best in the evening this month. The asteroid Vesta also reaches opposition and unaided eye brightness.

Mercury  is climbing higher in evening sky, and is at its best this month and until mid-September. It is low in the twilight half an hour after sunset in the first week of the month and get progressively higher. On August 4 it is close the bright star Regulus, It is furthest from the Sun on the 27th when Mercury is visible well after dark has truly fallen On August 29-30 the thin crescent Moon and Mercury are moderately close.

Venus continues to sink towards the horizon and by the end of the month Venus is lost in the twilight glow.

On the 26th Venus and the thin crescent Moon are close.

Jupiter climbs higher in the evening sky and is an good telescopic object in the late evening sky, although still best telescopically in the morning. On the 15th Jupiter is close to the waning Moon, with the pair in the same binocular field and Jupiter only 1° away.

Saturn is climbing higher in the evening sky but remains seen in the morning skies. Saturn is at opposition on the 15th, and is visible the whole night. Saturn will be high enough for good telescopic observation in the evening and early morning. Saturn forms a shallow triangle with delta and gamma Capricorn, becoming more elongated as the month wears on. On the 12th (morning 13th) the Full Moon is close to Saturn.

[I do know about perigee and apogee in reference to lunar forms].