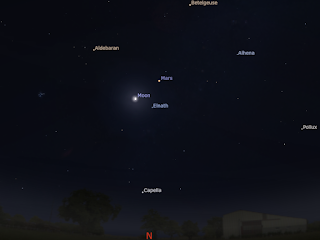 Morning sky on Saturday October 15 as seen from Adelaide at 05:08 ACDST (90 minutes before sunrise). The waning Moon, Mars and Beta Tauri (Elnath) form a triangle.

Similar views will be seen elsewhere in Australia at the equivalent local time (90 minutes before sunrise), click to embiggen

The October edition of Southern Skywatch is now up (sorry about another delay, travel and sickness). The planetary action is moving back to the evening skies, Jupiter is just past opposition and Saturn is still excellent. Mercury and Venus are is lost to view  this month. Saturn, Jupiter and Mars are still visible in the morning skies, though Saturn is progressively harder to see.

Mercury  returns to the morning sky this month, but never really makes it out of the twilight glow.

Mars is becoming brighter as it nears opposition, it is traveling down the “horns” of Taurus the Bull, away from the Hyades and Red Aldebaran and by the end of the Month will be between Beta and Zeta Tauri (the tips of the horns). On October 15th, the waning Moon, Mars and Beta Tarui (Elnath) form a triangle.

Jupiter rises shortly before the sky is fully dark and climbs higher in the evening sky and is an excellent telescopic object in the mid evening to early morning. Jupiter was at opposition, when it was biggest and brightest as seen from Earth on September the 27th. Jupiter is visible the whole night long. On the 8th and 9th Jupiter is just above, and then below the waxing Moon.

Saturn is now visible all evening long setting in the Early morning. Saturn was at opposition on the 15th of August and is visible high above the north-eastern sky when the sky is fully dark. Saturn will be high enough for good telescopic observation in the evening and very early morning. Saturn forms a line with delta and gamma Capricorn, coming close to iota Capricornii by the end of the month. On the 5th the waxing Moon is close to Saturn. Oct 9, 17 and 24 sees Titan close to Saturn.

Moon: perigee October 5 and 30 (November the 1st will be a perigee First Quarter Moon). Apogee October 17