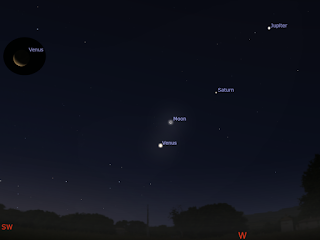 Western Evening sky on Tuesday, December 7 looking west as seen from Adelaide at 21:57 ACDST (90 minutes after sunset).  Venus is close to the Crescent Moon and forms a line with Saturn and Jupiter.

The inset shows the telescopic view of Venus. Similar views will be seen throughout Australia at the equivalent local time (90 minutes after sunset, click to embiggen).

This month the planetary action remains mostly in the evening skies, with 3 bright planets visible after the sky is fully dark at the beginning of the month, then Mercury joins the line up later in the month. Venus blazes in the west not far from the pair of Saturn and Jupiter in the north-west. Mercury is low the evening twilight. Mars climbs higher in the morning sky. The Moon does a planet dance with bright Venus, Saturn and Jupiter. The Geminid meteors are good this year. Possible binocular comet C/2021 A1 Leonard. Occultation of Mars on Mew Years day.

Mercury  is low in the evening twilight from the middle of this month of this month and encounters Venus. On the 27 Venus and Mercury can been seen low in the twilight half an hour after sunset together, and the pair are at their closest on the 29th (with Venus below).

Venus is easily visible at the beginning of the month in the evening sky from 30 minutes after sunset (I can see it as early as 5 minutes after sunset) until well after the sky is fully dark. Venus, Saturn and Jupiter make a nice line in the evening sky in December. Venus is at its greatest brilliance on the 4th, then rapidly moves to the horizon. Venus is a very obvious crescent in even small telescopes and will get thinner as it heads towards the horizon, by the end of the Month it may be visible as a crescent in binoculars.

Earth is at solstice on Wednesday the 22nd, when the day is longest.

Jupiter is readily visible from astronomical twilight and is now lowering into the western evening sky. Jupiter still bright and an excellent object in even small telescopes, but the window for telescopic observation is closing. At the beginning of this month at astronomical twilight, we can enjoy the sight the sight of bright Venus in the west forming a line with Saturn and bright Jupiter in the north-west. Once Venus has set Jupiter dominates the night sky. by the end of the Month Mercury has replaced Venus.

Saturn can be easily seen from nautical twilight (an hour after sunset) during December. Saturn is telescopically best at astronomical twilight, when the sky is fully dark, but from mid-month it is too close to the horizon for good telescopic observation.

The moon visits the bright planets in Turn, Venus on the 7th, Saturn on the 8th then Jupiter on the 9th. The Moon will be close enough to Jupiter for the pair to fit in the field of view of 10x50 binoculars. The sight of the three bight planets together with the Moon will be particularly beautiful.

Comments:
Thanks Ian, I'm sure there's more than just me who appreciates your continuing posts !
Alan