The Full Moon is Friday, November 19. The Moon is at apogee, when it is furthest from the earth, on the 21st. 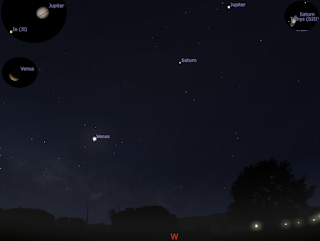 Evening sky on Saturday, November 20 looking west as seen from Adelaide at 21:44 ACDST (90 minutes after sunset).  Venus is in the handle of the "teapot" of Sagittarius forming a line with Saturn and Jupiter.

The insets shows the telescopic views of Venus, Saturn and Jupiter at this time. Similar views will be seen throughout Australia at the equivalent local time (90 minutes after sunset, click to embiggen). 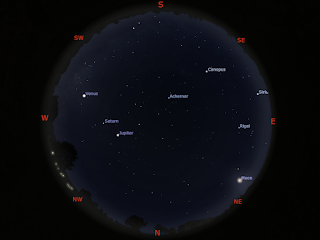 Evening sky on November 19 looking east as seen from Sydney at 20:02 AEDST (left panel) and Adelaide at 20:31 ACDST, at civil twilight (right panel). The the moon will yellowish where not eclipsed and ashen in the eclipsed section.

This month’s Partial Lunar Eclipse is very difficult from Australia. The Moon rises eclipsed and the shadow slips off the Moon during twilight. Best seen from the east coast, the central states see the final parts of the eclipse in twilight and Western Australia see virtually nothing. Still will be interesting to see for eastern and central states though.

Mercury  is lost in the morning twilight.

Venus is visible in the early evening when the sky is fully dark.  I have been able to see Venus from just after sunset and it is easily seen over 3 hours after sunset, longer if you have a clear western horizon.  Venus is in the handle of the teapot of Sagittarius, forming a line with Saturn and Jupiter.