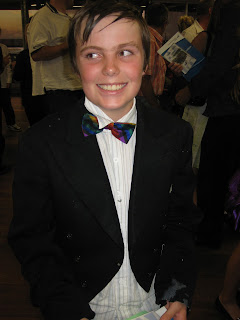 This was our first fathers day without Jack. The most recent in a perverse reverse count down, first Mother's Day without Jack, first Birthday, First New Year, First Christmas. Stepping stones to the distant time when when our breaths won't catch and the sadness will not well up in our chests at some event Jack should have shared with us.

Fathers day was not so bad, Jack had been away in Melbourne at Uni for two years, his fathers day presence was a distant telephone voice chatting about his faraway life in his city of dreams until we ran out of things to say and stuttered into awkward silence.

We still had longer and better conversations than I had with my dad.  At Jack's age I was even more absent, although I still lived at home I was out bushwalking virtually every weekend, when Fathers day came around there was not even my voice on the telephone, but silence and absence  as I toiled up some bush covered ridge far away from my dad.

This fathers day was made more bearable by an unexpected discovery. Scrabbling to find my astronomy notebooks to record the flyby of asteroid Florence, I found the text of Jack's Year 7 graduation speech.

It is funny how memory works. As soon as I picked it up there was an intense flash of Jack in his dress-up tails and psychedelic bow tie. A warm memory of him telling funny stories at the microphone in the sailing club where the event was held. The text was full of his self depreciating humour; Stapling his thumb, being bad at poetry and helping out with Traffic Monitor duties (two years later MiddleOne, with own brand of sarcastic humour, would speak of the same Traffic Monitor duty, make meaningful pause and then say "it was dull").

Jack's stated ambition when he went to high-school was to become a lawyer, but soon he would be derailed and head off into the path of a writer, telling tales that deeply touched everyone.

That was the memory I took with me into Fathers day, a happy memory of Jack, grinning with joy, larking with his mates, caught in that moment between a boy setting out full of enthusiasm on a path he imagines is his destiny, and a young man who has crafted a new path.

My breath still caught and the sadness was there, but buffered by that unexpected memory of joy.