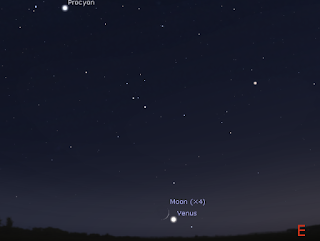 Morning sky as seen on September 18 an hour before sunrise. The crescent Moon is close to Venus. Later in the morning there is a daytime occultation of Venus. Similar views will be seen elsewhere in Australia at the equivalent local time. (click to embiggen).

The September edition of Southern Skywatch is  now up.
This month  Mars enters the morniing sky, but is very hard to see low to the horizon .

Saturn is still high in the early evening sky this month. This is still a good time to watch this ringed world in a telescope, although the window of good observation is narrowing. On the 26th and 27th Saturn is close to the Moon.

Mercury enters the morning sky this month but is very difficult to see low on the horizon.

Venus gets lower in the  morning sky this month. The crescent Moon is close to Venus on the 18th. Later in the morning there is a daytime occultation of Venus, this event is for experienced observers only due to the danger from accident sun exposure.

Comments:
nice article.
i would like to recomend simiilar article about space blog here https://www.loganspace.com