The New Moon is Tuesday, August 22. Mercury starts the week high above the horizon but sinks rapidly. Jupiter and the bright star Spica are nearby in the evening sky. Saturn is visible all evening in the heart of the Milky Way. Venus dominates the morning sky forming a triangle with the bright stars Betelgeuse and Procyon and is joined by the crescent Moon on the 19th.

The New Moon is Tuesday, August 22. The Moon is at Perigee, when it is closest to the Earth, on the 18th (There will be a total eclipse of the Sun on August 21 (US time) in the United States, there will be lots of live website viewing for this). 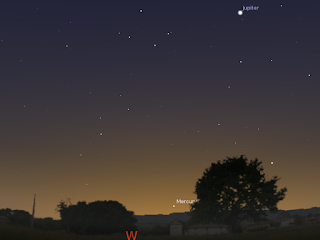 Evening sky on Saturday August 19 looking west as seen from Adelaide at 18:25 ACST (45 minutes after sunset). Mercury is low above the western horizon.

Mercury begins to fall back into the evening twilight sky. It was highest above the horizon on the 12th and  is now heading towards the horizon again. Mercury remains visible around 45 minutes after sunset 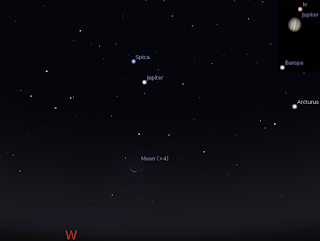 Evening sky on Wednesday August 24 looking north-west as seen from Adelaide at 19:12 ACST  (90 minutes after sunset). Jupiter is above the horizon between the bright star Spica and the relatively bright star Porrima. The crescent Moon is below the trio making a nice evening sight, The inset shows the telescopic view of Jupiter at this time.

Jupiter is rising before sunset and is above the northern-western horizon in the early evening at full dark. It is between the bright star Spica, the brightest star in the constellation of Virgo, and the relatively bright star Porrima. Jupiter is now closer to Spica. 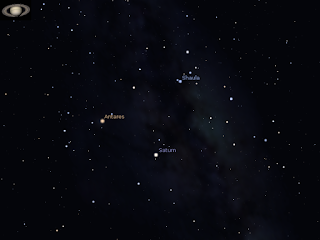 Evening sky on Saturday August 12 looking north as seen from Adelaide at 19:46 ACST, when Saturn is at its highest. Saturn is almost overhead high above the northern horizon. 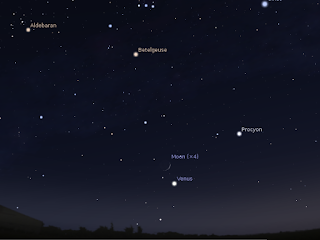 Morning sky on Saturday August 19 looking east as seen from Adelaide at 5:56 ACST (60 minutes before sunrise). Venus is dazzling below the bright star Betelgeuse and forms a triangle with Procyon and Betelgeuse. The crescent  Moon is close to the Venus.

Venus  is lowering in the morning sky and is visible in telescopes as a "Gibbous Moon". This week Venus forms a triangle with Procyon and Betelgeuse. The triangle is visited by the creescent Moon on the 19th.