You may have seen Facebook posts (or twitter notifications ) saying that on August 12/13 there will be a meteor shower that will be the brightest ever seen by mankind with Thousands of shooting stars. Well nope. This is the Perseid meteor shower, and though a reliable and good northern hemisphere shower, and hundreds of meteors may be seen under the best condition, this year the just bright waning Moon is in the sky above the meteor radiant, so rates will be lower than usual.

The Perseid Meteor Shower runs from July 17–August 24, and peaks in the early morning between Saturday August 12 - Sunday August 13 AEST. The midpoint is 20 H UT on the 12th (6 am AEST).  See the International Meteor Calendar for 2017 for further details.

This is a poor year, while the peak occurs after sunrise in Australia, it still occurs reasonably close to radiant maximum height and while this years peak is higher than usual (with a ZHR of 150 meteors per hour predicted) the bright waning Moon will substantially reduce the number of meteors you can see. 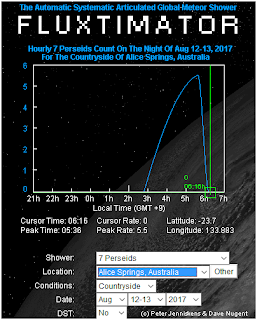 You can check predictions for your local area at the NASA meteor flux estimator (choose 7 Perseids and 12-13 or 13-14 August 2017). Unfortunately, both Chrome and Firefox have changed their security settings to prevent plugins from running, and the flux estimator only runs under Internet Explorer now.

Comments:
thanks for the info! this was not only really interesting, but helpful too :)

A conversation piece around the lounge room this afternoon and an awesome review from Ian...tells you where the meteor's are more predominant and a time frame for the best viewing period... I would have waited up all night looking at the sky wishing I was in Kakadu where on a cloudless night you can see the satellites orbiting the earth with the naked eye and don't get me started on the shooting stars... setting alarm for 2:30 am...A GOOD AND INFORMATIVE READ

Thanks for the info Ian! I'm working at the Giles weather station atm. So have nice dark skies, the milky way looks great! Even though Perseid's is northern hem, hoping to see some good ones over the weekend.
Cheers,
Brayden

Will melbourne see it?

Just cant wait so excited thank u for all ur info

Brayden, hope you have a great night. Anonymous, no you can't see them from Melbourne

Will you be able to see them in Adelaide?

No, you will not see them in Adelaide (we are far below the latitude of Brisbane, so have no hope of seeing any)