Asteroid 2014 JO25 is, as I type, making its closest approach to Earth (12:24 UT 19 April). Zipping past at 4.6 Earth-Moon distances at closest approach, this asteroid was moving at a speedy 92.2 arc seconds per minute whin I was  trying to image it, making imaging a tad challenging. However, using the remote telescopes of iTelescope in Mayhill New Mexico I succeeded (with a bit of bad luck with some cloud early on). With the wide-field T14 instrument I caught the asteroid zipping through a field of galaxies, looking rather nice. 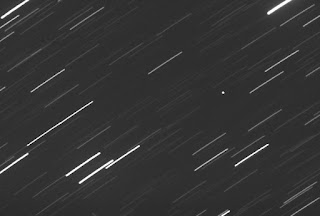 Asteroid 2014 JO25 also at 10:00 UT taken with iTelescope T5, moving so fast the tracker is just barely coping (hint the asteroid is the only thing that is not a streak).

Australia gets its chance tomorrow, when  the asteroid zips through Virgo. It won't be as bright as at closest approach, but still within reach of modest amateur scopes.

This is the closest approach of asteroid 2015 JO25 for around 400 years, and it wont come this close again for another 500 years.

Comments:
So did it already my by earth or is it going to come back by earth. What time Eastern time did it past earth?

This is great! thanks for your blog, really enjoy reading it :)