The New Moon is Wednesday April 26. 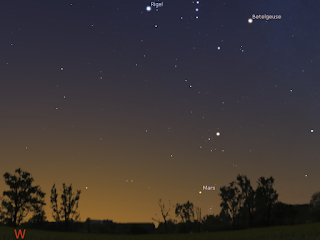 Evening sky on Saturday April 22 looking west as seen from Adelaide at 18:24 ACST (45 minutes after sunset). Mars is low above the horizon, between Aldebaran and close to the Pleiades.

Similar views will be seen throughout Australia at the equivalent local time (that is 450 minutes after local sunset, click to embiggen).

Mars is in the western evening skies in Taurus It is is low in the dusk sky, but is the brightest object above the western horizon low in the late twilight below Aldebaran. Over the week Mars passes between the Pleiades cluster and the Hyades cluster, you will need a clear, unobscured level horizon to see this though. 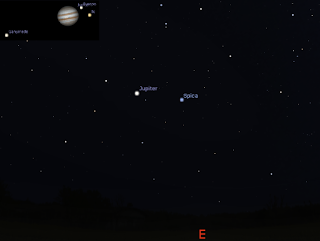 Evening sky on Saturday April 22 looking east as seen from Adelaide at 19:08 ACST (90 minutes after sunset).  Jupiter is above the horizon between the bright star Spica and the relatively bright star Porrima. The inset shows the telescopic view of Jupiter at 22:40 ACST on the same night with Europa appearing from occultation.

Similar views will be seen elsewhere in Australia at the equivalent local time. that is 90 minutes after local sunset, click to embiggen).

Jupiter is rising at dusk and is now reasonably high above the horizon in the early evening this week. It is in between the bright star Spica, the brightest star in the constellation of Virgo, and the relatively bright star Porrima.

Opposition, when Jupiter is biggest and brightest as seen from Earth, was on the 8th. Jupiter is rising as the sun sets and is visible all night long. Jupiter is a good telescopic target from around 8 pm on, and the dance of its Moons is visible even in binoculars. The following Jupiter events are in AEST. 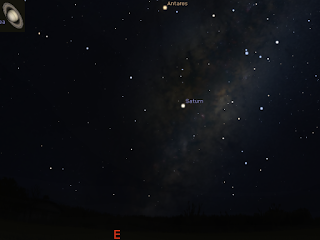 Evening  sky on Saturday April 22 looking east as seen from Adelaide at 23:00 ACST.  Saturn is reasonably high above the horizon.

Saturn is now visible in the late evening skies this week. Saturn is only a good telescopic target from midnight on. It continues to climb into the evening skies as the week progresses. It is within binocular distance of the Triffid and Lagoon nebula and makes a very nice sight in binoculars. 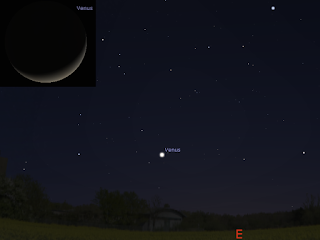 Morning sky on Monday April 24 looking east as seen from Adelaide at 5:20  ACST (90 minutes before sunrise). The inset shows the telescopic view of Venus at this time.

Similar views will be seen throughout Australia at the equivalent local time (that is 90 minutes before sunrise, click to embiggen).

Venus  climbs higher in the morning sky and is visible in telescopes as a crescent. On the monring of Monday 24th the crescent Moon is near crescent Venus. 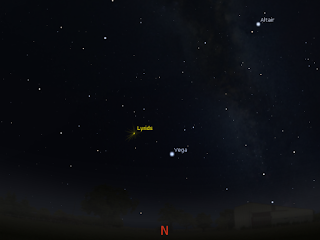 The morning sky looking north as seen from Adelaide at 4:40 am AEST on April 23. The Lyrid radiant is marked with a yellow starburst. Similar views will be seen elsewhere at an equivalent local time. The radiant will be higher in northern Australia, and lower in southern Australia (click to embiggen).


The Lyrids, the debris of comet C/1861 G1 (Thatcher) are a weak but reliable shower that occurs every year between April 16- April 25, the best time to view the Lyrids in Australia is from 4 am local on the 23rd.

The predicted ZHR this year is 18 meteors per hour. This means that under ideal conditions, you will see a meteor on average about once every three minutes. In Australia, the rate is even less, around 4-5 meteors an hour in Northern Australia (around one every 10 minutes). For southern Australia, the rate is even lower. If you are dedicated and don't mind waiting a long time between meteors, look north, the meteors will appear near the bright star Vega (the only obvious bright star near the horizon)