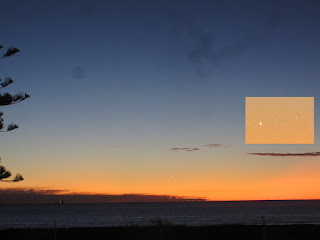 Venus and Mercury above the horizon in the twilight glow at 18:06 ACST on Sunday 17 July. The inset shows Mercury and Venus at full resolution. Imaged with my Canon IXUS at 400 ASA 0.4" exposure and 3x Zoom. Click to emibggen to be able to see Mercury better.

Venus and Mercury have returned to the evening sky. Last Sunday (17 July) the pair were very close together, around a lunar diameter apart.

Unfortunately they were also very low to the horizon. However, 10 minutes after sunset I could easily see Venus , but not Mercury. By half an hour after sunset when the pair were a little over 3 finger-widths above the horizon (which in my case was the ocean, lucky me).

I could just see Mercury with averted vision, in another 10 minutes Mercury was reasonably visible but still a little bit prone to disappear if you looked right at it. I took  the picture shortly after this, then hied it back home as the cold and some amazing cold-resistant mosquitoes were getting to me.

Mercury will now pull away from Venus, heading towards Regulus and Jupiter, becoming more visible as the month wears on, and heading for a spectacular conjunction with Jupiter and Venus in late August. .