Comet 252P LINEAR brightens rapidly, may be visible to the uniaded eye soon 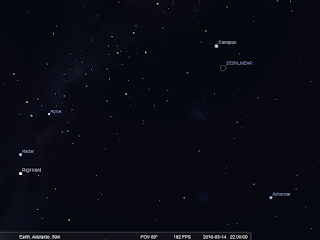 Comet 252P though as seen from Adelaide on 14 March looking south at 22:00 ACDST, similar views will be seen elsewhere at equivalent local times. The comet is not far from the bright star Canopus, between Canopus and the Large Magellanic Cloud. Click to embiggen.

252P passes through Pictor, Octanis and Scorpius and has its closest approach in Apis. The comet was predicted to have a maximum brightness of around magnitude 11.

However, comet 252P/ LINEAR has been reported to be anomalously bright, with reports putting it well above its theoretical maximum of magnitude 11. A recent report from Michael Mattiazzo has it at magnitude 8.2, and a more recent report from Chris Wyatt puts it at magnitude 7(!). Terry Lovejoy has seen it with 15x70 binoculars. While at magnitude 7 it theoretically should be readily visible in 10x50 binoculars, the fuzzy nature of the comet makes it harder to pick up. The comet appears to have a diameter of 23-24 arc seconds.

Currently the comet is brightening at around 1 magnitude per day!  If it follows its current brightening it could be visible to the unaided eye in a few days, however, the brightening Moon will make seeing an extended, fuzzy object like this comet more difficult. Of course there is no guarantee it will continue to brighten. 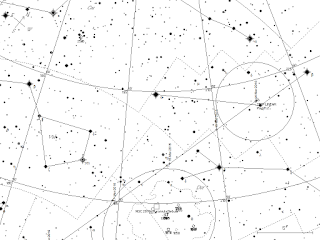 Black and white chart of the path of comet 252P/LINEAR suitable for printing and for use with binoculars. The circle is the field of view of 10x50 binoculars. Click to embiggen.

The comet is moving very rapidly leading up to closest approach. On the 16th and 17th (and part of the 18th) comet 252P will be close to the Large Magellanic Cloud. This should make for interesting viewing and some mice astrophotographs, if the Moonlight doesn't interfere too much.