The First Quarter Moon is Wednesday March 16. Jupiter is  is visible all night long and has some nice Moon events. Venus and Mercury are  low above the horizon. Saturn  is close to the red star Antares and forms a triangle with Mars, which is closing in on the head of the Scorpion. Mars is very close to the star Graffias.

The New Moon is Wednesday March 9  The Moon is at perigee, when it is closest to the Earth, on the 10th. 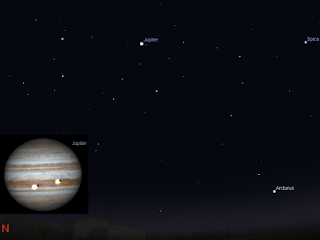 Evening sky on Friday March 11 looking north-east as seen from Adelaide at 23:55 ACDST. The inset is the telescopic view of Jupiter at this time, showing Io, Europa and their shadows on Jupiter. Similar views will be seen elsewhere in Australia at the equivalent local time. (click to embiggen).

Jupiter was at opposition on the 8th, when it was biggest and brightest as seen from Earth. However, Jupiter will be an excellent telescopic target for many week to come.

Jupiter enters the evening sky as the sun sets, and is  good for telescopic observation from around 22:00 on. Jupiter's Moons will be an excellent sight late in the evening. On March 11 Io and Europa and their shadows cross the face of Jupiter from around 10:30 pm to 2:00 am on the 12th.

The evening is also graced by the summer constellations of Taurus (with the V shaped cluster the Hyades forming the head of Taurus the Bull and the beautiful Pleiades cluster nearby), Orion the Hunter and Canis Major with bright Sirius, the dog star, above the north-western horizon at the beginning of evening. 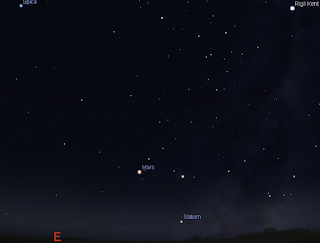 Evening sky on Wednesday March 16 looking east as seen from Adelaide at 23:55 ACDST. Mars is almost on top of the brightish star Grafias. Similar views will be seen elsewhere in Australia at the equivalent local time. (click to embiggen).

Mars is high in the morning skies and is now rising in the evening before  midnight. Mars is coming closer to the head of the Scorpion.

On the 16th, Mars will be less than half a finger-width from the double star Graffias. In a small telescope the bright pair and Mars, showing a visible disk, will be quite nice.


Saturn enters the evening sky and is readily visible below Scorpius. Saturn forms a triangle with Mars and the red star Antares. 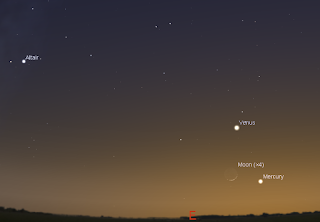 Early morning sky on  Tuesday March 1 looking east as seen from Adelaide at 6:30 ACDST showing Venus and Mercury.  Similar views will be seen elsewhere in Australia at the equivalent local time. (click to embiggen).

Venus is easy to see in the morning twilight. It is a  distinct "gibbous Moon" shape and is nice in a small telescope. Venus is above Mercury, which is rapidly heading towards the horizon.

Mercury is low in the morning twilight ad difficult to see. This is the last week to see it before it is lost in the twilight.
There are lots of interesting things in the sky to view with a telescope. If you don't have a telescope, now is a good time to visit one of your local astronomical societies open nights or the local planetariums.