The Sky This Week - Thursday February 25 to Thursday March 3

The Last Quarter Moon is Wednesday March 2. The Moon occults beta Virginis ont he morning of the 25th. Jupiter is visible in the late evening sky. All five bright planets; Jupiter, Mars, Venus, Saturn and Mercury form a long line in the morning sky.  Venus and Mercury are close low above the horizon. Saturn  is close to the red star Antares. The Moon visits Mars on the 1st, and Saturn on the 2nd and 3rd.

The Last Quarter Moon is Wednesday March 2. The Moon is at Apogee, when it is furthest from the earth, on the 27th. 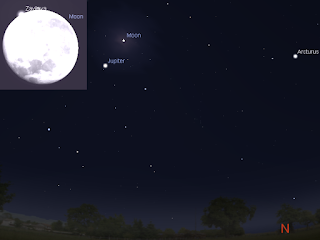 The evening sky facing east in Adelaide on February 25 at 4:45 am ACDST showing the waning Moon just about to cover Zavijava (Beta Virginis). (similar views will be seen from other central and eastern locations at a similar local time eg 5:27 AEDST Canberra). The inset shows a telescopic view of the Moon at 4:45 am ACDST, with Zavijava about to go behind the Moon.(click to embiggen).

For more detail and timings see this page.

Jupiter enters the evening sky around 20:30 local daylight saving time, but is only really good for telescopic observation from around 22:00 on. Jupiter's Moons will be an excellent sight late in the evening.

The evening is also graced by the summer constellations of Taurus (with the V shaped cluster the Hyades forming the head of Taurus the Bull and the beautiful Pleiades cluster nearby), Orion the Hunter and Canis Major with bright Sirius, the dog star, above the northern horizon at the beginning of evening. 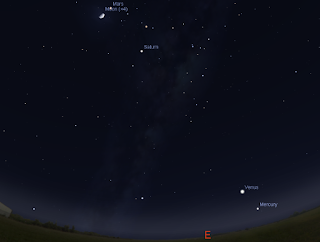 Early morning sky on  Tuesday March 1 looking east as seen from Adelaide at 6:00 ACDST showing the Moon close to Mars, with Saturn and the red star Antares close by, and Venus and Mercury.  Similar views will be seen elsewhere in Australia at the equivalent local time. (click to embiggen).

Jupiter is lowering in the north-western morning skies and is rising around 20:30 in the evening.

Mars is higher in the morning skies and is readily visible in the pre twilight dark. Mars slowly heads towards the head of the Scorpion. The waning Moon visits Mars on the 1st.

Venus is easy to see in the morning twilight. It is a  distinct "gibbous Moon" shape and is nice in a small telescope. Venus is now within less than a hand-span of Mercury, and the pair remain close for the next week.

Saturn climbs higher in the morning sky. The crescent Moon visits Saturn on the 2nd, making a nice patern with Mars and Antares, and is still close on the 3rd.

Mercury is low in the morning twilight. Mercury and Venus  are within less than a hand-span of each other, and the pair remain close for the next week.