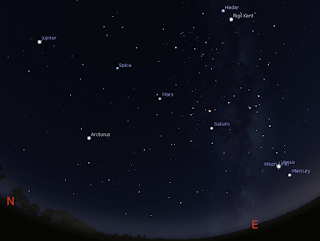 The line-up of Jupiter, Mars, Saturn, Venus and Mercury as seen from Adelaide on the morning of 6 February at 5:30 am. (click to embiggen)

The February edition of Southern Skywatch is  up.  This month features still more nice planetary action. It is in the early morning with Mercury, Venus, Saturn, Mars and Jupiter forming a line in the morning sky and the crescent Moon joining them. This means that all five bright, classical planets are visible together in the morning for the first time since January 2005.

Venus is prominent in the morning twilight and is close to the crescent Moon on the 6th 7th. It is close to Mercury from the 6th to 22nd.

Mercury is at its best on the 7th, but remains good for most of the month.

The waning Moon passes in front of the moderately bright Zavijava (Beta Virginis) in the constellation of Virgo on the morning of February 25.