Seeing Comet C/2013 X1 and its Outburst in Australia


Comet P/2013 X1 (PANSTARRS) is reported to be in outburst at magnitude 8.1 or brighter (there have been reports in the high 7's but I haven't seen them directly). This makes the comet potentially visible in binoculars, and rather obvious in telescopes.

Unfortunately for Australians the comet is currently in the Great Square of Pegasus, forming a triangle with Gamma and Chi Pegasi. This means that it is very low to the horizon, and can only be seen for a short time after astronomical twilight in the evening before it becomes too low. 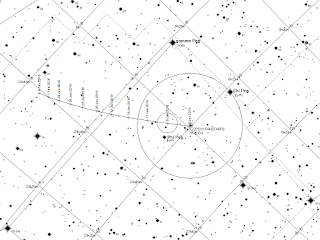 Black and white printable map suitable for use with binoculars or a telescope. The stars Gamma nd Chi Pegasi (indicated on the chart above) are shown for orientation. The large circle is the filed of view of 10x50 binoculars, ad the small circle the FOV of a 24 mm eyepiece on a 114mm Newtonian reflector. Click to embiggen and print.

Southern Australia has the worst view, with the comet only 10 degrees or a little bit more above the horizon, where horizon murk will make it harder to see. 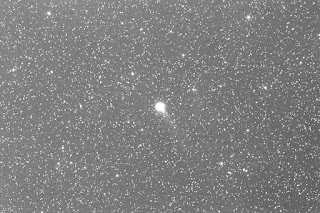 My image of C/2013 X1 taken with the iTelescope remote scope T20 in New Mexico on the 4th.