The New Moon is Sunday January 10. Jupiter is visible in the late evening sky. Jupiter, Mars, Venus and Saturn form a long line in the morning sky and are joined by the waning to crescent Moon. On the 7th Venus, Saturn and the crescent Moon form a triangle. Venus and  Saturn are closest on the Saturday 9th.

The New Moon is Sunday January 10. 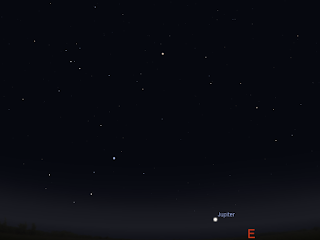 Evening sky on Sunday January 10 looking east as seen from Adelaide at 23:55 ACDST. Jupiter is just above the horizon shortly before midnight. Similar views will be seen elsewhere in Australia at the equivalent local time. (click to embiggen).

Jupiter enters the evening sky around midnight daylight saving time, it is low on the horizon for most of the week. 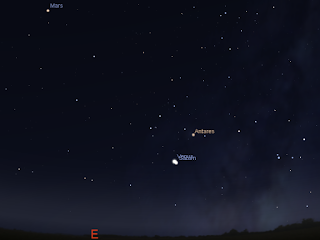 Early morning sky on Saturday January 9 looking east as seen from Adelaide at 5:00 ACDST showing Mars, Venus and Saturn with the red star Antares close by.  Similar views will be seen elsewhere in Australia at the equivalent local time. (click to embiggen).

Jupiter is high in the morning skies and is rising before midnight by the end of the week.

Venus, Saturn and the red star Antares form a triangle low in the early twilight. During the week Venus traverses the head of the Scorpion and meets on Saturn. 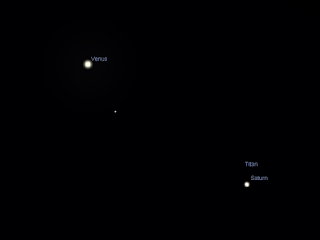 Venus is closest to Saturn on the morning of January 9th. Simulation in Stellarium of the telescopic field of view in a 10 mm eyepiece with a 114 mm Newtonian telescope. Similar views will be seen in a variety of telescopes. (click to embiggen).

On the morning of Thursday January 7, Venus Saturn and crescent Moon are close and on the morning of the  9th, Venus and Saturn spectacularly close (and also visible together in a low power telescope as illustrated).