The Sky This Week - Thursday September 25 to Thursday October 2

The First Quarter Moon is Thursday October 2. Mercury, the bright star Spica and the crescent Moon form a triangle in the sky on the 26th. The crescent Moon then visits Saturn on the 28th. Mars climbs the body of the Scorpion and is close to Antares from the 28th to the 30th. The waxing Moon is close to Mars on the 29th and 30th.  Jupiter becomes more prominent in the morning sky. Comets C/2013 A1 Siding Spring and C/2013 V5 are in the reach of small telescopes. 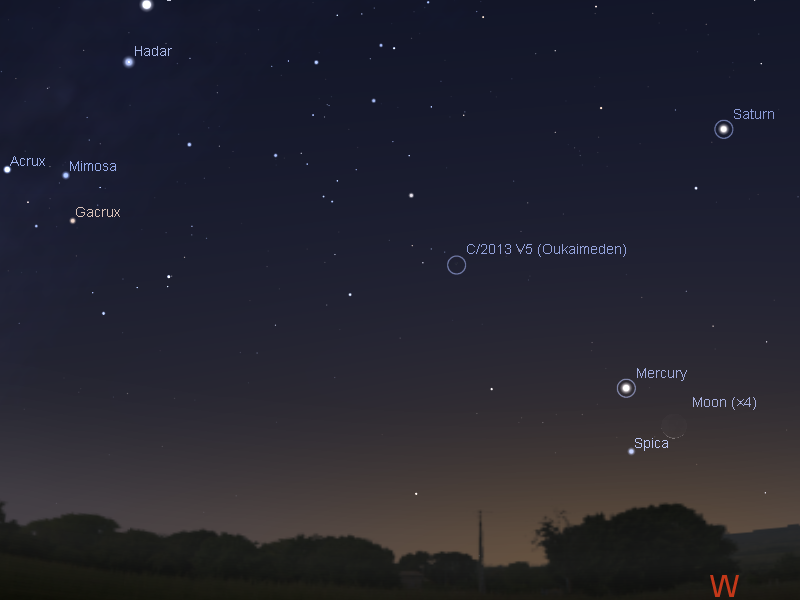 Mercury slowly heads towards the horizon in the evening sky but is still readily visible above the western horizon. It is now easy to see from half an hour after sunset to  an hour and a half after sunset, when the  zippy planet is in dark skies.

Mercury is easy to see in the early evening now. although it is now heading for the horizon, it still draws  away from Spica. On the 26th Mercury, Spica and the crescent Moon make an attractive triangle in the evening sky..

Comet C/2013 V5 is still surviving, but has not yet reached preihelion yet. It is visible in strong binoculars and small telecopes as it rises higher into darker skies. More detailed viewing maps suitable for binoculars are here.

Evening sky on Monday September 29 looking west as seen from Adelaide at 20:00 (8:00 pm) ACST in South Australia. Mars is close to Antares and the Moon. Saturn is  under the head of  Scorpius. Similar views will be seen elsewhere at the equivalent local time (click to embiggen).

Mars is in the constellation of  Scorpius. It forms a line with the red star Antares (which means rival of Mars) and Saturn (and Spica and Mercury) at the beginning  of the week. During the it climbs towards Antares, coming closest to the bright red star between the 28th and the 30th. On the 29th and 30 the waxing Moon is close to Mars. .

Saturn is in Libra near the head of the constellation of the Scorpion and forms a  line with Mercury, Spica, Mars and Antares.On the 28th the crescent Moon is close to Saturn. 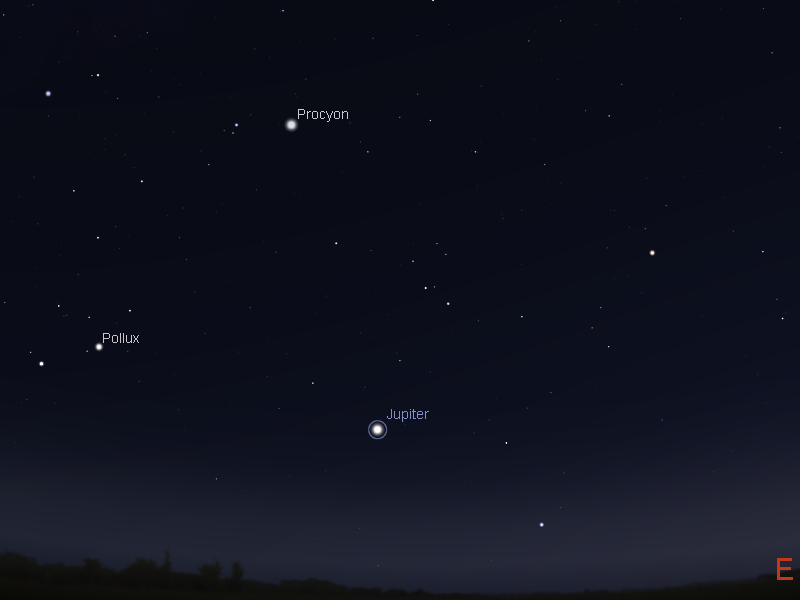 Morning sky on Saturday September 27 looking north-east as seen from Adelaide at 5:00 am ACST.  Jupiter is above the north-east horizon. (click to embiggen).

Comet C/2013 A1 Siding Spring is rising higher the the evening sky, being highest around midnight. It is currently located just above the  Southern Cross. At magnitude 8.8 it is now only visible in a small telescope. The comet is located in a beautiful patch of sky, but will become hard to see as the Moon waxes. A printable black and white chart suitable for binoculars is here. The large circle is the field of view of 10x50 binoculars. 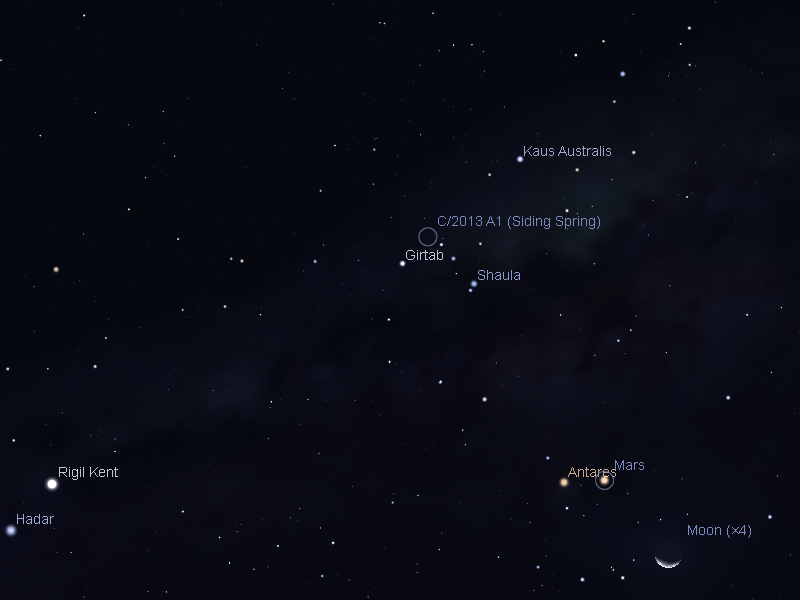 Evening sky on Monday September 29 looking west as seen from Adelaide at 20:00 (8:00 pm) ACST in South Australia. Comet C/2013 A1 Siding Spring is in the tail of the Scorpion. Similar views will be seen elsewhere at the equivalent local time (click to embiggen).