The Full Moon is Wednesday October 8, there is a total Lunar Eclipse at this time. Mercury is still easily visible. Mars climbs the body of the Scorpion. Saturn is low in the evening sky. Jupiter becomes more prominent in the morning sky. Comets everywhere!

The Full Moon is Wednesday October 8. There is a total Lunar Eclipse in the early evening. Daylight saving time starts October 5. 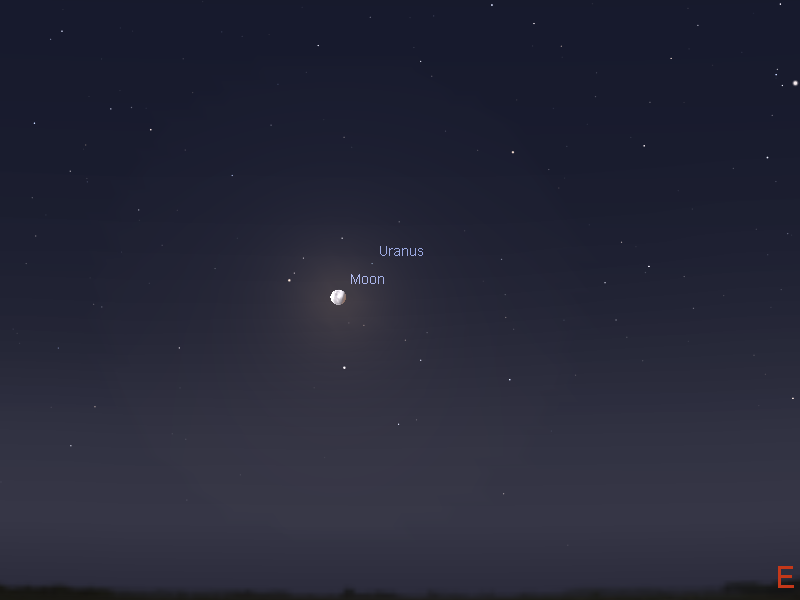 Eastern horizon as seen from Adelaide on 8 October at 8:09 pm ACDST . The eclipse is just starting. Click to embiggen.

On the evening of 8 October there will be a total eclipse of the Moon. The 8 October eclipse occurs shortly after Moonrise in the eastern and central states, in Western Australia the Moon rises with the eclipse under-way and totality occurs during nautical twilight. This is the best Lunar eclipse until 2018.

For the East Coast Moon Rise is around 6:36 pm,the eclipse begins at 7:15 pm AEST, maximum eclipse is at 8:55 pm, total eclipse ends at 9:25 pm and the eclipse finishes at 10:35 pm AEST (daylight savings starts on Oct 5 for those states that use it).

For the Central states Moon Rise is around 6:15 pm (see twilight/sunset calculator below), the eclipse begins at 6:45 pm ACST, maximum eclipse is at 8:25 pm, total eclipse ends at 8:55 pm and the eclipse finishes at 10:05 pm.


More details, timings, and charts can be found here. 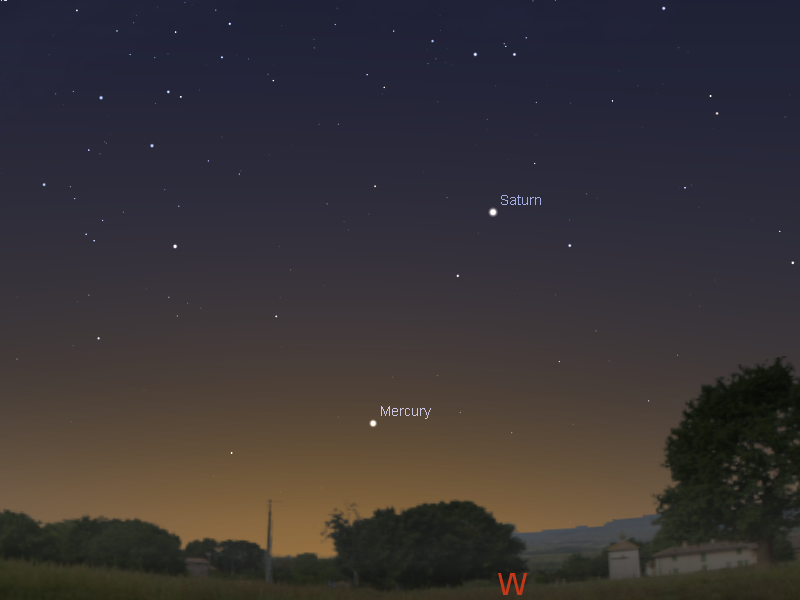 Evening sky on Saturday October 4 looking west as seen from Adelaide at 19:00 (7:00 pm) ACST in South Australia. Mercury is the brightest object above the western horizon. Similar views will be seen elsewhere at the equivalent local time (click to embiggen).

The western horizon still has a long string of bright objects making an interesting (if battered) line in the sky. Spica, Mercury, Saturn, Mars and Antares. The line is topped off by the hook that is the tail of the Scorpion, embedded with clusters and nebula (and comet C/2013 A1, see below).

Mercury is easy to see in the early evening. Although it is now heading for the horizon, it still draws  away from Spica. 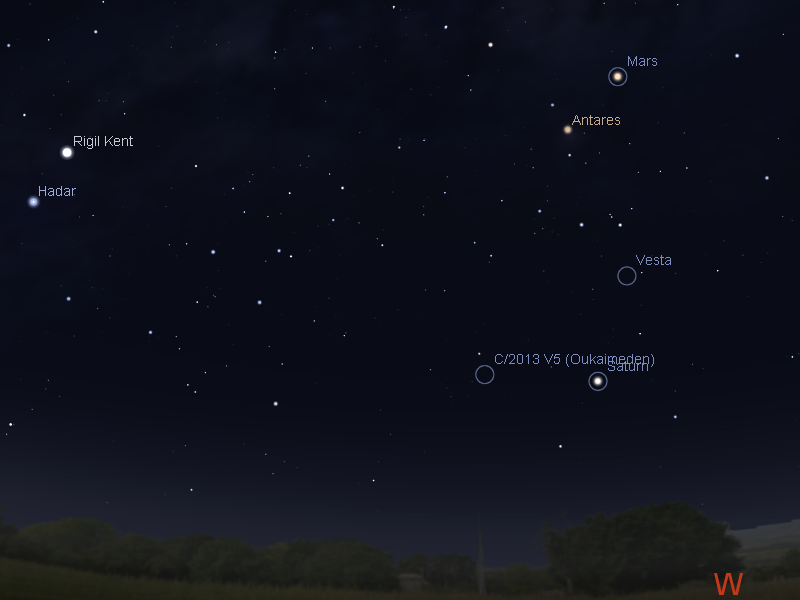 Evening sky on Sunday October 5 looking west as seen from Adelaide at 21:00 (9:00 pm) ACDST in South Australia. Mars is close to Antares and the Moon. Saturn is  under the head of  Scorpius. Comet C/2013 V5 is now in dark skies and may be visible near Saturn. Similar views will be seen elsewhere at the equivalent local time (click to embiggen).

Mars is in the constellation of  Scorpius. It starts the week near the red star Antares (which means rival of Mars) then moves above and away as it heads towards the star clouds of Sagittarius. Mars forms a somewhat battered line with Antares, Saturn (and Spica and Mercury) towards the end of the week.

Comet C/2013 V5 has passed perihelion and is still surviving. It is visible in very strong binoculars and medium sized telescopes as it rises higher into darker skies. While it is leaving behind the twilight the increasing Moonlight will make it more difficult to see this week. More detailed viewing maps suitable for binoculars are here. 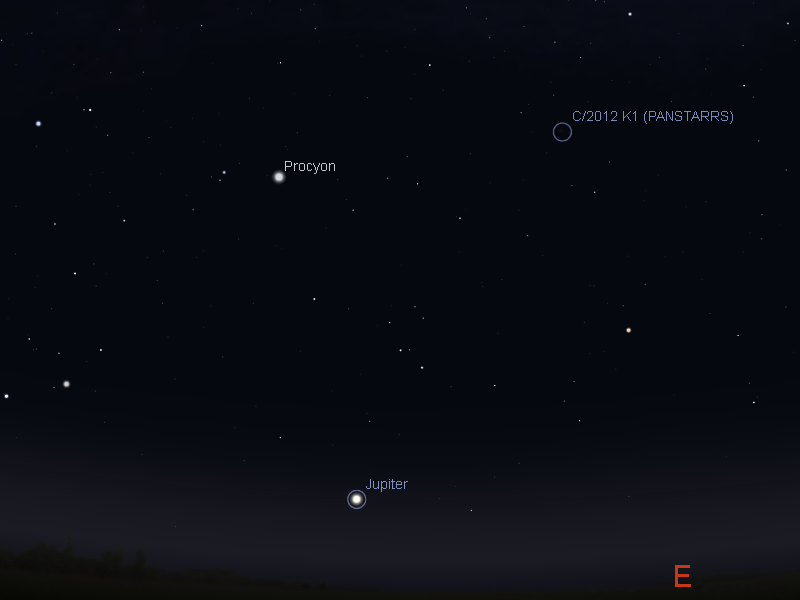 Morning sky on Sunday October 5 looking north-east as seen from Adelaide at 5:00 am ACDST.  Jupiter is above the north-east horizon. (click to embiggen).


Venus is lost in the glare of the Sun.

Comet C/2012 K1 Panstarrs is rising higher in the morning sky  and should be readily visible in 10x50 binoculars as a fuzzy dot with a stubby tail. 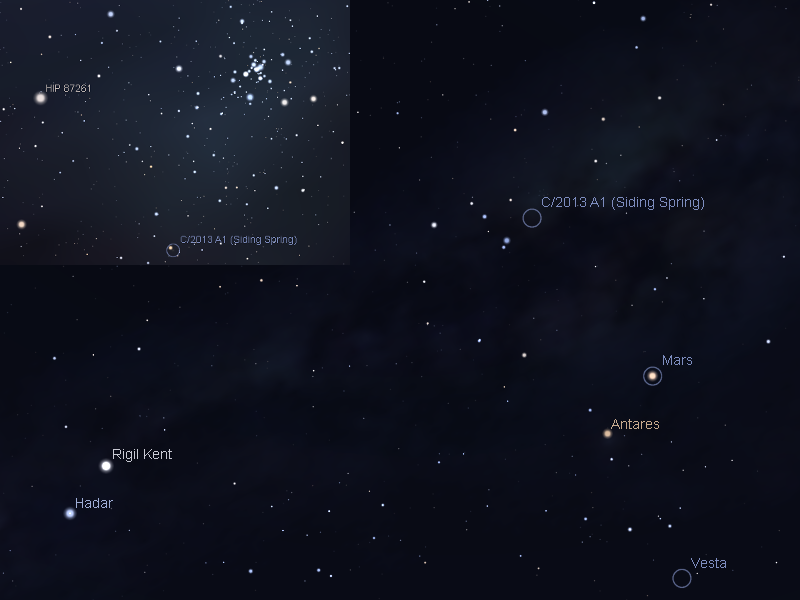 Evening sky on Sunday October 5 looking west as seen from Adelaide at 21:00 (9:00 pm) ACDST in South Australia. Comet C/2013 A1 Siding Spring is in the tail of the Scorpion. Similar views will be seen elsewhere at the equivalent local time (click to embiggen).


Comet C/2013 A1 Siding Spring is high in the the evening sky, and is mow in the tail of the Scorpion. At magnitude 8.8 it is now only visible in a small (or larger) telescope. The comet is located in a beautiful patch of sky, passing through some rich stellar fields. However, it will become hard to see as the Moon waxes. A printable black and white chart suitable for binoculars is here. The large circle is the field of view of 10x50 binoculars. On the 5th the comet is binocular range of  Ptolemy's Cluster.