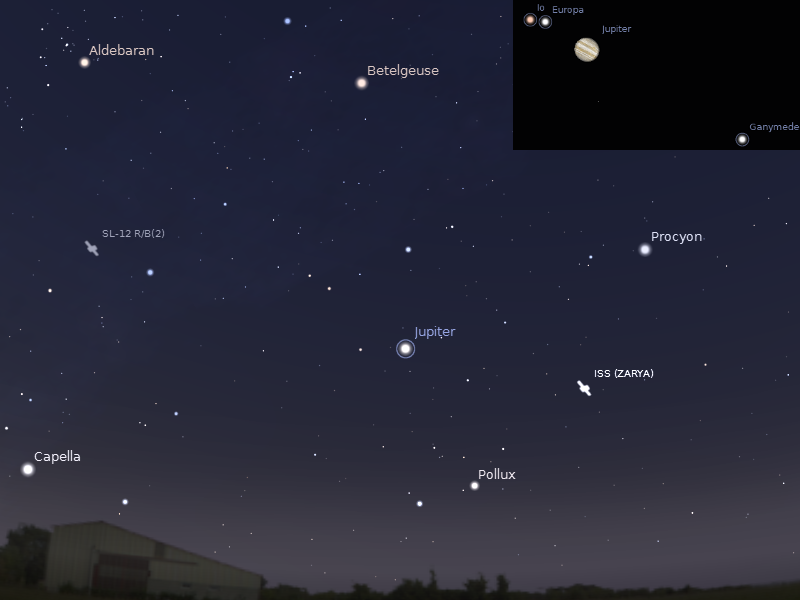 Evening sky on Thursday January 23 looking north-east  as seen from Adelaide at 21:12 pm ACDST in South Australia. The International Space Station is passing by Jupiter at this time. The inset shows the view of Jupiter through a telescope at this time.  Similar views will be seen elsewhere at the equivalent local time (click to embiggen).

Jupiter is in the constellation Gemini. It is the brightest object in the evening sky. Jupiter was at opposition on the 6th of January, when it was brightest and closest to Earth, but will remain bright and easily observable in telescopes for several months.

Jupiter rises around 19:30 pm local daylight saving time, and is highest just after midnight. It is high enough to observe telescopically in the mid to late evening.

It is above the north-eastern horizon near the bright stars Castor and Pollux, the twins of Gemini. It is quite easy to see as the brightest object in the entire sky.  Jupiter's Moons are readily visible in binoculars.

January 30 has an interesting patten of Jovian Moons, with all the Moons lined up on one side of Jupiter, in pairs.

This week see the end of a series of bright passes of the International Space Station. For more details about seeing them from your location see this link. 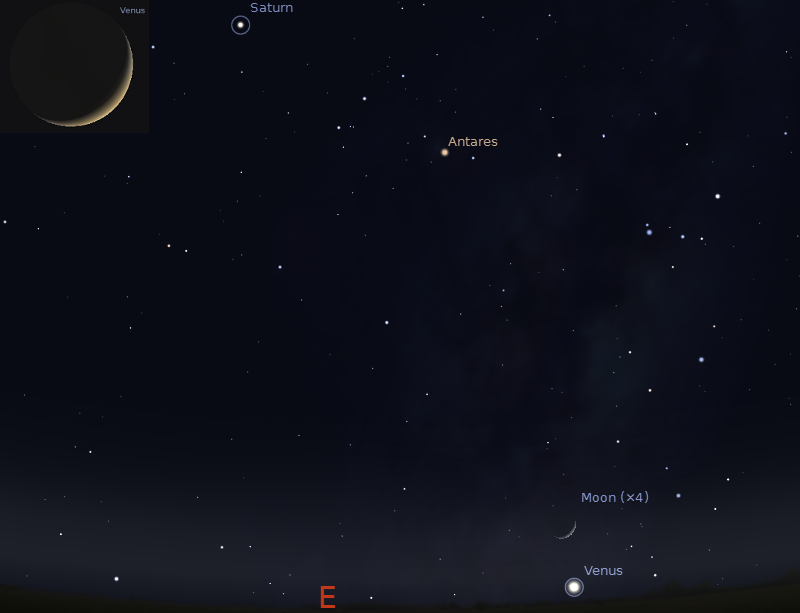 Venus returns to the morning sky, initially difficult to see in the twilight, it will rapidly grow brighter. On the 29th the crescent Moon is near the crescent Venus low above the eastern horizon.

Mars rises still higher in the morning twilight, and is visible well before twilight. Mars is is in the constellation of Virgo near the bright star Spica. On the 24th Mars, Spica and the crescent Moon make a nice triagle in the sky, a little wider than the one on the 23rd, but nice nonetheless.

Saturn is visible above the eastern horizon before dawn. Saturn is in Libra near the head of the constellation of the Scorpion.  It is  high enough in the early morning for decent telescopic observation. On the 26th the waning Moon is close to Saturn. 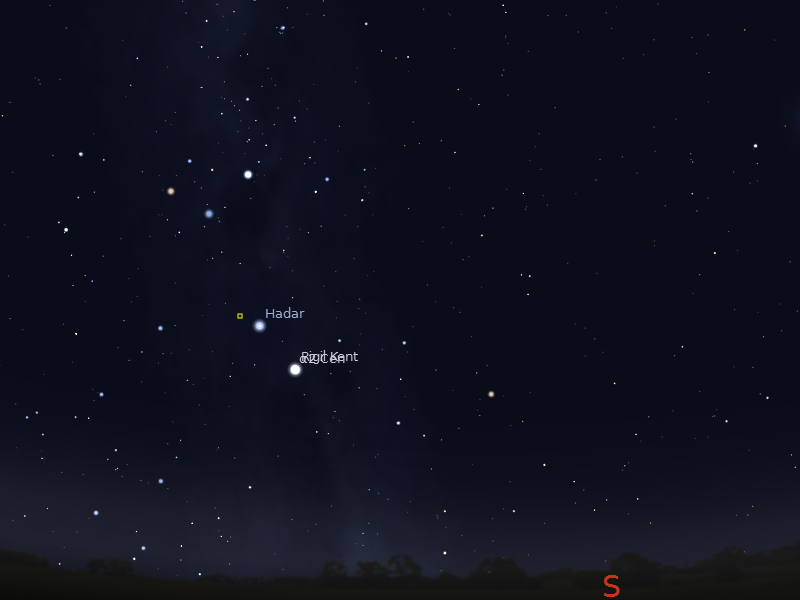 Location of Nova Centauri 2013 as seen looking north from Adelaide at 11:30 pm ACDST local time.The location is marked with a square. Similar views will be seen at the equivalent local time in other Southern Hemisphere locations. Click to embiggen.

V1369 Centauri, Nova Centauri 2013 near beta Centauri keeps on keeping on. Now that the Moon has gone from the evening sky is still bright enough (magnitude 5.5 as I type, it has been undergoing a series of outbursts) to be seen faintly with the unaided eye, and very easily in binoculars. It is one of the brightest nova known, and over 50 days later it is still interesting to follow, nmaybe there will be another bright outburst. The nova is now high enough in the evening sky from around 11 pm on for a good look.

More detailed spotters charts and instructions are here.
There are lots of interesting things in the sky to view with a telescope. Especially with Venus so prominent in the sky.  If you don't have a telescope, now is a good time to visit one of your local astronomical societies open nights or the local planetariums.