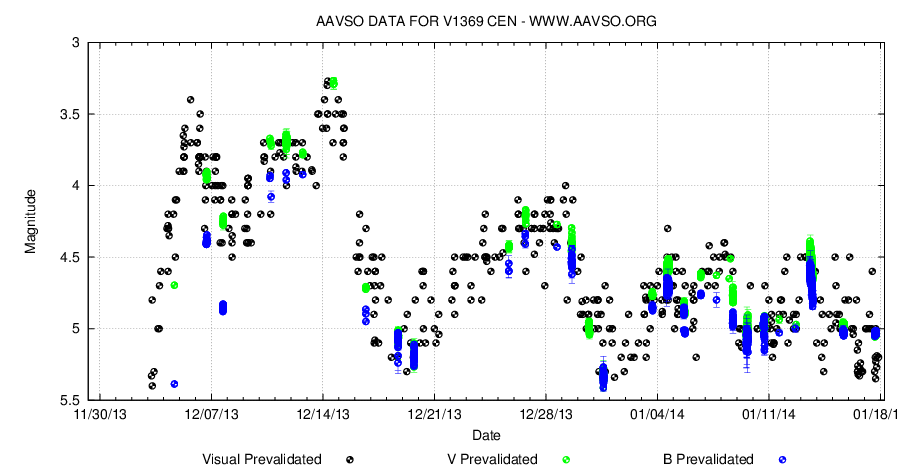 Current lightcurve for V1369 Nova Centauri 2013 from the AAVSO.  Click to embigen.

Nova Centaui (V1369 Cen) is now over one and a half months from when it first brightened, and it is still visible to the unaided eye.

Over the past 46 days the nova has oscillated in brightness, after becoming one of the brightest nova since 1891. With 4 outbursts since the initial one, it has been keeping well above magnitude 5.5 (magnitude 6 is the limit most people can see under dark skies, many suburban sites let you see down to magnitude 5).

This behaviour suggests that this is a slow nova, like V723 Cas and V5558 Sag, where the primary star is a low mass white dwarf.  The multiple outbursts of this kind of nova suggest we may be seeing V1369 Cen for some more days to come, and maybe even be a few more outbursts (see the graphs near the end of this paper and here). I haven't seen any mention of whether it is a Helium/Neon nova, where the blast sends neon blasting off the white dwarf surface, but this spectrum is intriguing.

Comments:
I'm not a vs observer or nova-hunter, but this fella's got me very intrigued. I've been checking the light curve daily for weeks, fascinated by its ups & downs. Looks like we might be seeing another 'up' just starting, after a 2-week slide.

Catch a Series of Bright International Space Satio...
Tonight's mini-Moon (16 January 2014)
Catch the smallest full Moon of the year tonight
Jupiter Near the Moon (January 15, 2014)
Will We See Meteors for Comet ISON on January 15 a...
The Sky This Week - Thursday January 16 to Thursda...
Say Farewell to Sunspot AR1944
And now for something completely Different (a phot...
Moon 9 January 2014 (OR what you do while waiting ...
Sunspot AR 1944 Still Looking Awesome