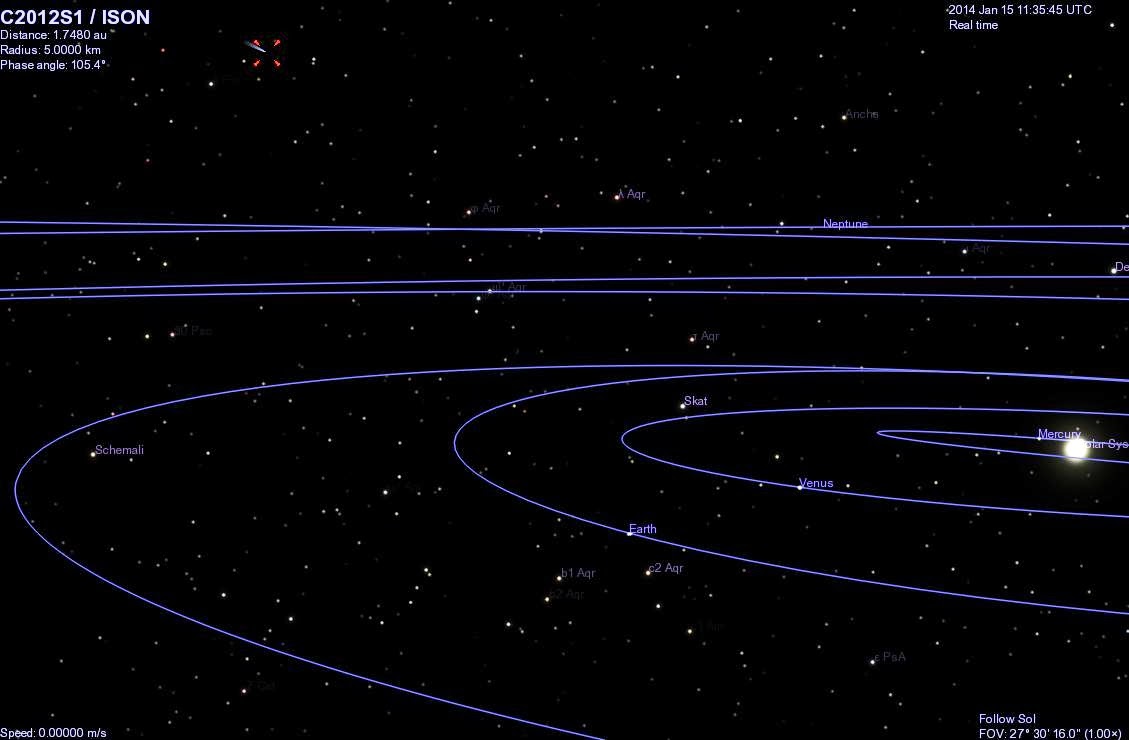 Where comet ISON would be on January 15, 2014. Any debris from the breakup of ISON will be Centred on this location, well above Earth between the orbit of Earth and Mars.

Once again we are seeing claims of a possible meteor shower from the long departed Comet C/2012 S1 ISON. Comet ISON broke up as it rounded the Sun, a rapidly fading cloud of dust was seen exiting the STEREO H1 A imager, but despite repeated attempts, no on has been able to observe the remnants of ISON since.

The meteor claims come from three different sources. Each with a different likelihood of happening, all either non-existent or remote.

1) Debris from the breakup of ISON back in late November - early December.

Nope, not happening. When comets break up they don't go all explody like in Hollywood. The debris remains fairly close to the original orbit of the comet (we have numerous examples where we have seen this). Also, the comet passed its closest approach to Earth back on December 26th (at our closest we were a bit under half the distance from Earth to the Sun).

The nominal position of ISON is now well above Earth's plane of orbit, between the orbit of Earth and Mars. Any remnants of the comet are close to this position so, no, no meteors from the pile of gravel and dust formerly known as ISON. 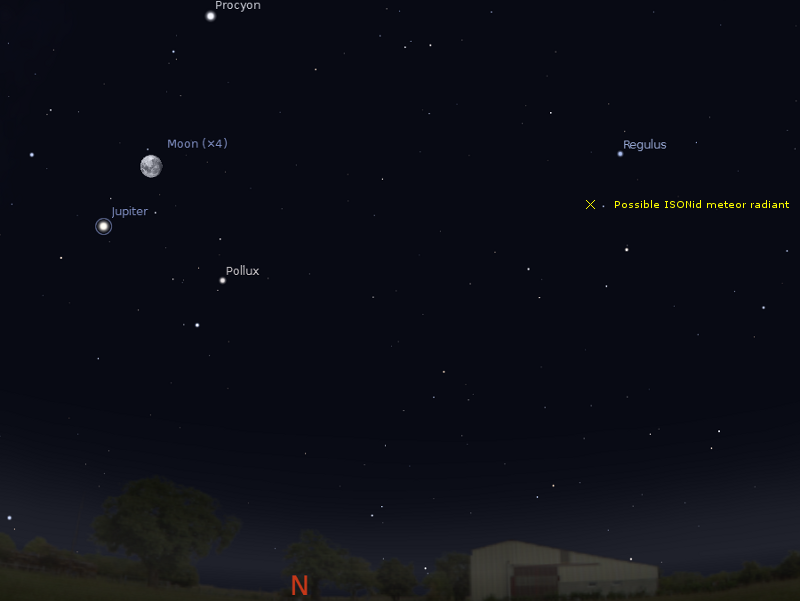 2) Dust released from ISON as it was approaching the Sun.

Around November 2 the comet passed 0.0227128 AU above the plane of Earth's orbit (this is 10 times the distance from the Earth to the Moon). On the 15th and 16th (AEDST, 14th and 15th Universal Time) Earth will be close to where ISON passed.

BUT, what will be passing is dust that was released two and a half months earlier (EDIT Jakub Cerny points out that orbital and solar wind/light pressure issues means that it is likely the dust will have been released mor tha 2.5 months earlier), when the comet was far less active, also the comet was passing above Earth's plane of orbit, so the solar wind will have been pushing any dust away from Earth (although larger particles will keep to the original orbit). As well, ISON turned out to be relatively dust poor compared to other comets.

So it is very unlikely we will get an meteors from ISON this way (see my previous post on this for more detail).

However, if we do get meteors, they should be originating from the sickle of Leo (see this post from Rob Lunsford at the American Meteor Society, his dates  are for America though). The image above (click to embiggen) shows the view at 2 am ACDST as seen from Adelaide on 16 January. Similar views will be seen elsewhere in Australia (and other Southern hemisphere locations) at a similar local time.

Given the low likelihood of meteors in the first place, and the full Moon close by, I will be surprised if anyone sees any meteors.

3) Dust blown back from ISON when it was closer to the Sun.

Despite the title of the article, this wasn't about meteors (the NASA PR department should hang its head in shame). Meteor researcher Paul Wiegert suggested that ultra-fine dust particles from ISON might be blown back onto Earth by the solar wind, forming noctilucent clouds (NOT meteors).

However, as ISON turned out to be smaller than we thought, and less dusty than average, this scenario is also much less likely now.

Meteors from ISON, not likely, but going out on the early mornings of the 15th and 16th could be possibly pick up one or two meteors per hour that may be from ISON (or none).