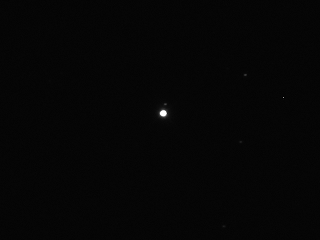 Neptune as imaged with iTelescope T9 on August 27.

Neptune was at opposition, when it is biggest and brightest as seen from Earth, on August 27.

Mind you this dioesn't mean much, as Netune is normally a dim magnitude 8. However, over the past 50 years Neptune has been edgeing closer to Earth at every opposition, it is now a mere 28.9729 AU from Earth, compared with 29.3258 in 1958.

However, for the moment Neptune is magnitude 7.8 (and will be for all of September as well) this means it is potentially visible in strong binoculars (at least 10x50's) under dark sky conditions for the next month, when it is normally only visible in telescopes.

It will be a faint dot, but you will have the satisfaction of knowing that you are seeing the farthest planet in our solar system.