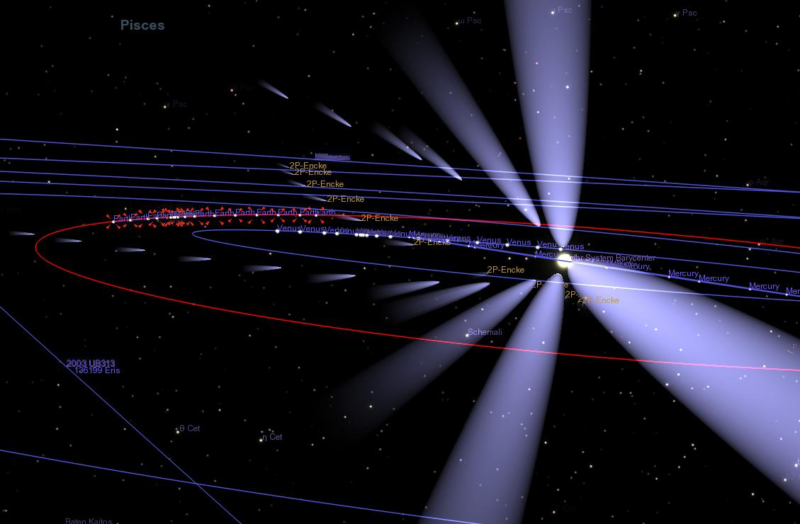 Simulation of the orbit of comet C/2012 S1 ISON between 1 November 2013 and 12 December 2013. Earths orbit is indicated in red, and red crosses mark the location of Earth as ISON makes it's close approach. Note that Earth does not cross the comets tail (click on the image to embiggen for more detail). Simulation in Celestia.

There's been some speculation on the web that a) we will cross comet C/2012 S1 ISON's tail, and b) we will get meteor showers from it.

Now, on the face of it this is not unreasonable. After all, all bar one of our current meteor showers are due to Earth intersecting the debris trails of comets. The Leonid meteor shower, for example, is due to us intersecting debris from the comet 55P/Temple Tuttle.

But there's the rub, Earth actually has to intersect a debris trail.

To start off with Earth doesn't actually cross comet ISON's tail, it's a bit hard to tell here, as you lose the third dimension (but you can try fooling around with the JPL orbit diagram for ISON, needs JAVA), but if you look carefully at the embiggened diagram above you can see that Earth is nowhere near comet ISON's tail.

Comet tails point way from the Sun, due to the solar wind blowing the dust and gas away. The larger particles form a slowly expanding cloud which follows the orbit of the parent comet.It's a little difficult to make out, but the comet starts out well above the plane of Earth,s orbit, the dips below, all while the Earth is over 1 Astronomical Unit (the distance of the Earth to the Sun) away.

As the comet nears the Sun, the tail is angled away from Earth's orbit, it may briefly flick over Earth's orbit as the comet rounds the Sun (assuming the comet doesn't disintegrate) and the tail is long enough, but it will be a bit over 6 months before Earth reaches that spot. All comet particulates will be long gone by then.

However, in general one pass comets do not produce meteor showers, their transient dust trains do not intersect Earth's orbit. The dust trains we do intersect to produce meteors from known comets (Like 55P/ temple Tuttle and the Leonids, the Perseids and 109P\Swift-Tuttle) have been ejected decades to centuries before.

Unexpected Rainbows, mobile phone edition part som...
Mercury in the Morning (4 April 2013)
A Sundiving Comet Meets its End (27-03-13)
The Sky This Week - Thursday April 4 to Thursday A...
Southern Skywatch April 2013 Edition is Now Up.
Carnival of Space #295 is Here!
MiddleOne is an Even Number Old
The International Space Station Crosses Orion's Be...
Carnival of Space #294 is Here!
More News on Comet 2013 A1 (Siding Spring), A Mars...