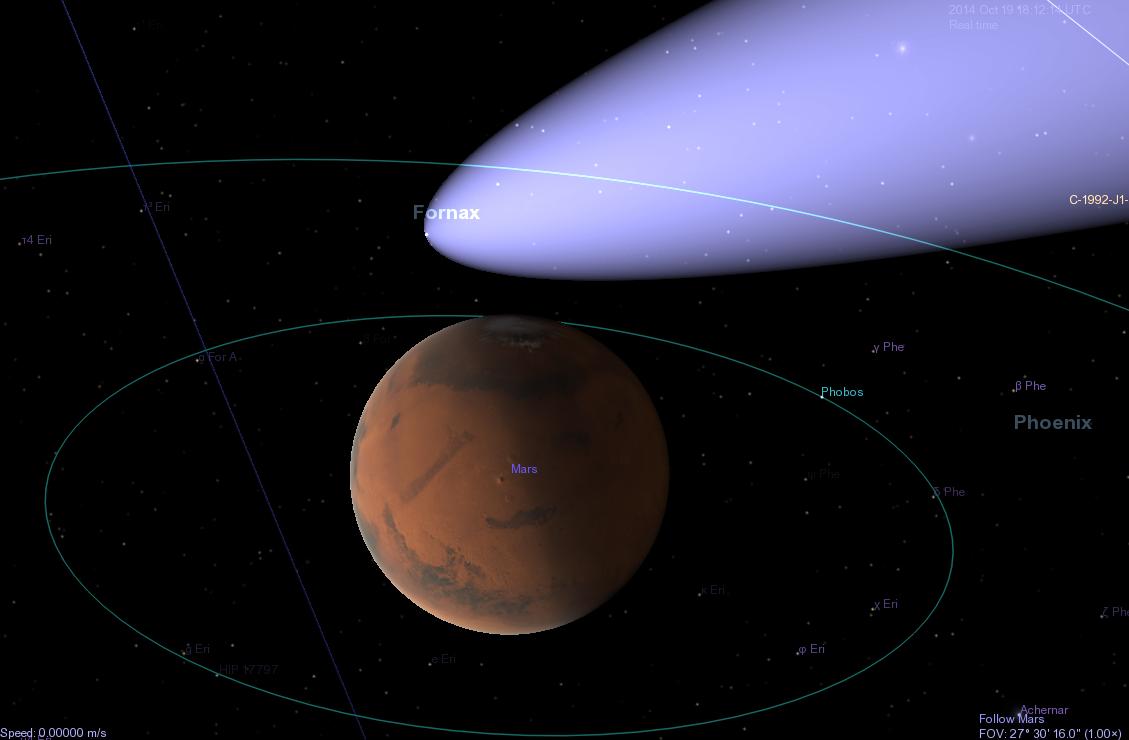 After obtaining more positions for comet C/2013 A1 Siding Spring (141 positions over a orbital arc of  171 days using pre-discovery images), we have a better idea of the comets encounter with Mars.

The nominal close approach is now  0.0008 AU. This is a bit further out than the previous 0.0007 AU (see my previous posts here and here), and still further out than the 0.00023 AU close approach of 2012 DA14, which missed us by two Earth diameters. To put this is still more perspective, the Martian Moon Demios is 0.00016 AU from Mars, so the nominal solution for the comet is nearly 4 times further from Mars then its outmost Moon.

Despite the improved orbital measurements, the error associated with this estimate still includes an impact though (and a maximum miss of 0.0022 AU), so although the orbit is more tightly constrained, an impact still can't be ruled out at this stage.

However, orbital simulations  from Leonid Elenin suggest that an impact is very unlikely. Probably in the range of 0.08% or less.

We still need more observations to pin down the orbit more tightly and get a better idea of whether it will impact, but the trend of the recent observations suggets a close approach .

Even if it doesn't impact it will look pretty good from Earth, and spectacular from Mars (revised orbit gives  a magnitude -8 comet as seen from Mars's surface), which might be observed by the flotilla of orbiting spacecraft and the rovers. But it's not as simple as it seems, power issues and the ability to point cameras in the right direction all must be addressed.  This NASA article outlines the issues with getting them to do the imaging. Sadly, it seems the MAVEN atmospheric sampler will not be ready, even though it arrives a few weeks beforehand.

A collision would also be spectacular, but the rovers may not fare so well as debris rains down over the planet. 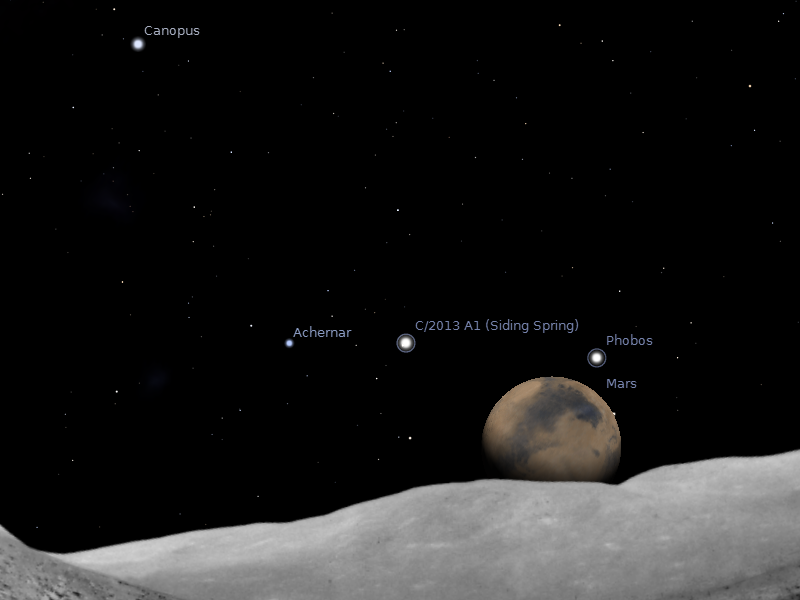 Importing the latest elements into SkyMap or Stellarium suggests that from Earth we will still see the comet and Mars less than a minute of arc from each other, which will look quite nice in telescope eye pieces (but hard to image as the comet will be a dim magnitude 8.5 form Earth and Mars bright).

Comments:
Ah, but the latest estimates of its size put it between 1 KM and 3 KM diameter which means out gassing can be expected to have an effect. The comet is expected to pass between Mars and the Sun. Out gassing from a small, non periodic comet tends to create a radial anti sol force. A small shift outward makes a collision more likely. We'll have to wait for A1 and A2 non gravitational parameters to be determined before we know what out gassing will do.