Alpha Centauri B has a (red hot) Earth-sized Planet 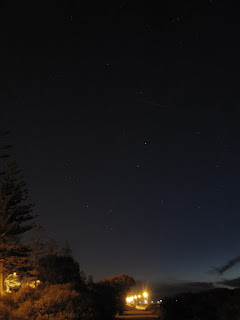 Australian's can never look at the sky the same way again. When you go out tonight to look at the southern sky, you know that alpha Centauri, the red star in the iconic pointers, the pair of stars that point to the Southern Cross, has an Earth-sized world orbiting it.

A hellish, red hot world, true. One that screams around it's sun (alpha Centauri B, alpha Centauri is a triple star system) in just over 3 days. It snuggles closer to its sun than Mercury does to ours and its surface is most likely covered in a magma ocean. Not the place that bright eyed pioneers would fly to in gleaming silver spaceships.

But its a world around one of the southern hemisphere's iconic and brightest stars. Sure we have something like 800+ confirmed planets around other stars, a fair few solar systems, and even one or two have planets in the hypothetical habitable zones of their suns.

But the vast majority are too dim to see with the unaided eye, or barely visible, and rejoice in names like GJ 1214b, Gleise 581 e, Upsilon Andromedae A and 55 Cancerii e. 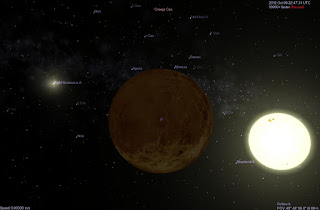 Alpha Centauri Bb, simulated in Celestia with two of its three suns visible.

In contrast alpha Centauri is bright, and part of an easily recognisable asterism. It looms large not only in the skies of the southern hemisphere, but also our fiction and imaginations.

In terms of our stepping stones into space, The Moon, Mars* and then alpha Centauri, the triple star system on our doorstep a little over 4 light years away, has loomed large. Alpha Centauri has featured heavily in science fiction too, and Pandora, the world of the Na'vi, orbits Alpha Centauri A. The new world orbits alpha Centauri B as mentioned above.

Could there be other planets in the alpha Centauri system, ones that are more like our familiar planets?

Certainly, although they may be hard to find. This new world (we have to think of a name for it, Mustafar is already taken, how about magmamare) was discovered by the slight doppler shift in its stars light as the planet tugged on its sun as it orbited.

This means in these kinds of searches its easier to find big things close to their suns (which explains why until recently most of the extrasolar planets we found were massive things bigger than Jupiter as close or closer than Mercury). To find a Jupiter- like world in a Jupiter like orbit, we would have to watch the system for 36 years (as we need to watch 3 orbits to make sure the signal is real).

So there's a real chance that there are other, more familiar worlds circling the alpha Centauri system, and you can bet people will be looking for them now.

Next time you go outside and look south at the pointers, you will now know that there is a world, out there, not of our solar system, that is tantalisingly just beyond our reach.

You can find the original paper describing the discovery here. A good discussion at Nature, and another good article at Centauri Dreams.