The Last Quarter Moon is Monday June 11.  Mars is in the western evening sky.  Saturn is visible near the star Spica. Jupiter and Mercury return to the morning and evening skies respectively. 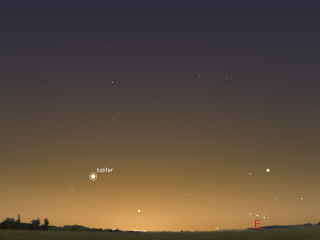 Morning sky on Sunday June 10  looking east as seen from Adelaide at 6:45 am local time in South Australia.
Jupiter is above the horizon, not far from the Pleiades cluster. Similar views will be seen elsewhere at the equivalent local time (click to embiggen).

Jupiter returns to the morning sky this week. It will be hard to see until late in the week, but if you have a fairly flat, uncluttered horizon it will look quite nice in the early twilight.

Bright white Venus is is lost in the twilight but will be seen juts peeping over the horizon by the end of the week. 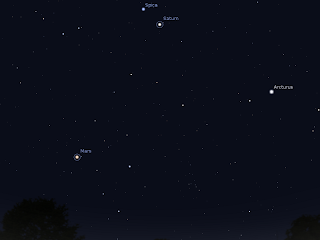 Mars is close to the bright star sigma Leonis by the end of the week.

Saturn is above the northern horizon, not far from the bright star Spica. Saturn is high enough in the northern sky for telescopic observation in the evening, being highest at 9:00 pm local time. local time. Saturn was at opposition, when it is biggest and brightest as seen from Earth, on the 16th of April, but now is still a great time for telescopic views of this ringed world. On Friday June 1 Saturn, Spica and the Moon form a nice triangle in the sky.

Mercury returns to the evening sky and by the end of the week can be seen low above the westen sky shortly after sunset. Best seen with a flat, uncluttered horizon. . 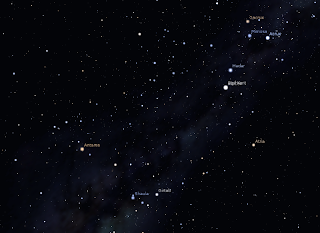 Have you seen the Emu?  The Emu is an aboriginal constellation composed of dark clouds in the Milky Way. Best seen far away from the city lights, outer suburbs may also see it in the early evening before the Moon rises.

The Transit of Venus as seen from the Solar Dynami...
Venus at Mid transit by Mobile
Better shot of transit
Mobile phone transit
Sic Transit Venus
Twas the Night Before the Transit...
The Transit of Earth from Mars, November 10, 2084
The 2012 Transit of Venus in Stellarium
The Track of the Sun (Solargraphy finis)
Cloudy Partial Eclipse