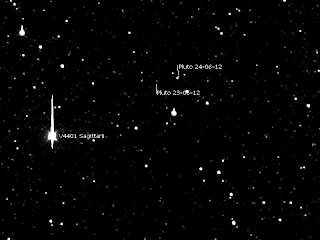 Pluto imaged on 23 and 24 June 2012 using the iTelescope T05 system. Single images the brightness and contrast adjusted then aligned with ImageJ.

Pluto tends to be ignored a lot by us, after all, even though it is an iconic planet,it's just a dot in most peoples equipment. But it's still fun to do animations of Pluto. My animated GIF of this is here.

Also, between 28 June to 2 April Pluto will be skimming past the open cluster M25, this will be worth some shots.