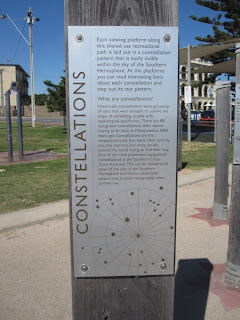 There is a combined footpath bicycle path that runs behind the dunes of the local beach. A little while ago the city council put in viewing platforms where people could stop, rest and look out at the view.

To start with, the initial panel shows an apparent polar region of the sky with completely imaginary stars. How hard would it have been to use real star positions?

Then there is Orion, one of the classic constellations. I've contrasted their illustration of Orion with the actual constellation below. They used the correct southern hemisphere orientation for Orion, which is a good start, then it gets a bit sad. 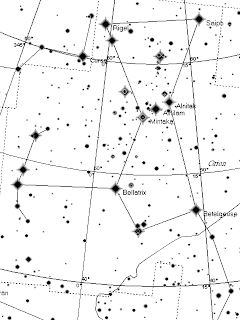 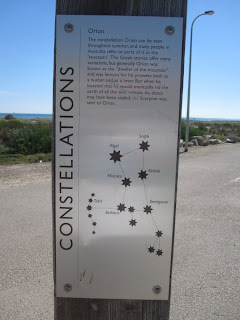 Now, I am quite aware that there are a variety of design issues that would prevent a realistic portrayal of the constellation, but the artist left out Alnilam, the brightest star in Orions' Belt!

It probably wouldn't matter so much, but the "saucepan", formed by the belt and the stars of Orions' sword, is a classic Australian asterism, the second most recognised asterism after the Southern Cross. The artist put a lot of effort into Orions' shield (although the location of Tabit is wrong, it should be the leftmost star), how much effort would be needed to get Orions' belt right? 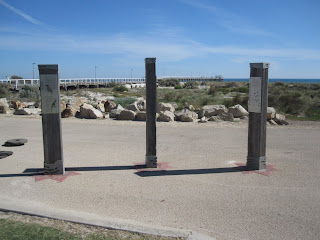 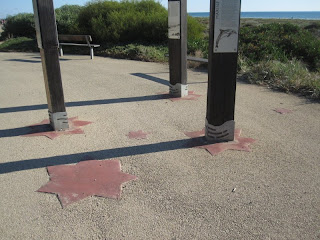 Then there is the constellation layout of the platforms themselves. According to the information plaque, each platform is laid out in a pattern of an easily recognised constellation. Except they aren't.

I suppose the Orion platform could be representing Orions belt, but they left the sword off. It certainly doesn't look like the "saucepan" we know and love. The platform for the Southern Cross has at least the major stars in the right position, but what is with the minor stars? They are nowhere near where the should be. The plaques could at least be re-drawn to show the stars more correctly, but the stars on the platforms are concreted in and can't be moved.

I think this kind of outreach is fantastic, and the Council and their artists, and information people did a great job with the natural history and the history. We always take visitors to the platforms when we take them down the beach. Why- oh-why couldn't they get the astronomy right? Couldn't they at least have had an astronomer eyeball the designs before they started laying them down?