Tyche, it's not Nibiru (and probably not even real) 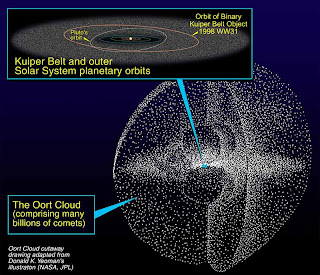 It was inevitable, after the British newspaper The Independent overhyped some researchers claims about the possible existence of a jovian (or larger) mass planet out in the Oort belt, some Nibiru folks have jumped on this.

The Bad Astronomer has already dealt with the likelihood of there actually being a planet out there, so I won't go into any detail. Just to briefly recap though, statistical analysis of long term comets suggested (with marginal statistical significance), more comets were bring ejected from the Oort cloud in the plane of the ecliptic than elsewhere, and the researchers hypothesised that there was a Jovian (1-4 Mjup) mass planet disturbing the Oort cloud. You can read their latest paper here. The take home message from this paper is that, should Tyche exist (the proposed name for the planet should it in fact exist), is that it is, at its closest 2,000 au from the Sun. Depending on the mass of course, the bigger the planet is, the further it is from the Sun to produce the effects seen. A 5 MJup planet would have to be 6,000 au away (roughly 1/10 of a light year). To give a feel for this scale of this distance, Pluto is roughly 40 au away, Eris (Xena) at its most distant is roughly 98 au away and Sedna at its most distant is 960 au away (currently it is a mere 90 au away).

But then again, the paper helps out there, the authors have searched the IRAS archives extensively, and they conclude there is no 1-4MJup planets out to 2,000 au, so Nibiru is not out there.

Of course, instead of jumping at and down at the latest press release, or images of haloes, the Nibiru folks could have been actually looking for themselves. The IRAS archives are publicly available, there are heaps of remote telescopes that you can buy time on to serach with and of course, most decent amateur scopes would be able to pick out a Mjup planet at Pluto's distance, so there are many avenues for searching. And if Nibiru is going to be in the inner solar system in 2012, then they have a good idea where to look.

So why aren't they looking for real?

Tyche is Nibiru with another name. As you do not want to give the plunge, you use a euphemism to avoid calling the thing by its name. By this way,it looks like you guys are talking about something else and easily mislead the unwary.

We are not fools nor mentally retarded.