The First Quarter Moon is Wednesday January 12. Jupiter is easily seen in the evening sky. The crescent Moon visits Jupiter on January 10. Venus is visible in the morning sky not far from the bright star Antares with Mercury not far below. 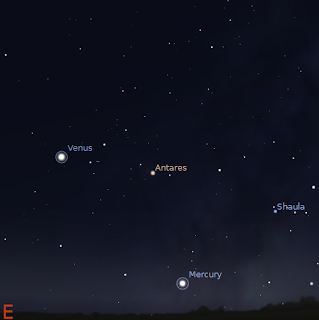 Morning sky looking east as seen from Adelaide at 5:00 am daylight saving time on Saturday January 8 showing Venus, Mercury and the bright Antares. Similar views will be seen elsewhere at the equivalent local time. Click to embiggen.

Bright white Venus continues to rise above the eastern morning horizon and is now readily seen in the early morning sky.

Venus, Antares and Mercury form a large triangle in the morning sky. Venus's crescent shape is easily seen in small telescopes. Venus will progressively decrease in size and wax towards "First quarter" over the coming weeks.

Saturn, is high enough for telescopic observation. You might be able too see the big storm on Saturn if your telescope is big enough. 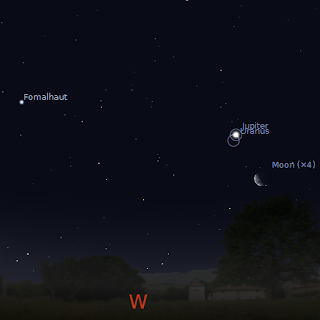 Jupiter and Uranus are still close together, and are readily seen together in binoculars. Uranus is the second brightest object north of Jupiter and the star 20 Piscium. Uranus in fact bright enough to be (just) seen with the unaided eye under dark sky conditions. A binocular spotters map is here.

Comments:
Thanks Ian for your undying devotion to us mere Plebeians out here whom without your guidances would waste our lives searching the NORTHERN HORIZON for CRUX.