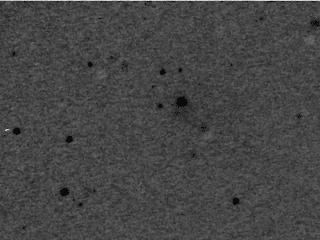 The coma surrounding 596 Scheila imaged with global rent-a-scope G-2 instrument on 14-12-10. Image is a stack of 9 x 60 sec exposures stacked in ImageJ, then SUMMED, inverted, contrast enhanced and despeckeled.

After my initial attempt to image the coma around 596 Scheila with a short image stack at astronomical twilight, I though that a deeper stack well before twilight would have better results.

Well, as you can see the result is not so good. I was trying to match the sensitivity and resolution of the G7 instrument with a narrower filed of view, hoping to wring more detail out. It didn't work. Why not use the G7 instrument itself? Logistics of work and family meant it was shut when I had imaging time. 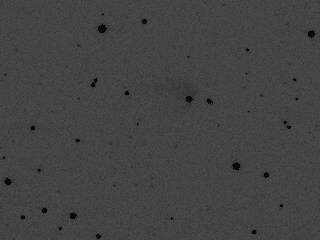 I then did what I should have done in the first place. Used the G-11 instrument (but no, I just had to be clever hadn't I). As you can see the coma is well described even in a single 120 sec exposure.

The coma is still well visible 4 days after the initial discovery, in fact it has been observed visually (though a telescope of course). It is still not clear whether this is an ordinary asteroid that has had a collision, or a dormant comet undergoing an outburst. Interestingly, 596 Scheila is one of 4 "T" class asteroids, which have a number of comet like features and are related to "D" class asteroids, which may be captured Kuiper belt objects. 596 Scheila will reach opposition on 3 February, when it reaches magnitude 13.4 . Following Schelia and the evolution of it's coma over the coming weeks should be interesting, and may throw more light on the evolution of comets.

A recent spectrum of 596 Schelia after its outburst is here at John Menke's site, it looks like a lot of dust, apparently. J-F Soulier's images show the evolution of the coma, and another nice image from Francous Kugel, another from Aldo Proiett, Martin Mobberley's G-11 image of the 14th. Finally, Joseph Brimacombe has a nice image and a great animation at his site.

Comments:
Elenin has to be fairly small."
Really, MR. Musgrave, I say about right now Elenin should be within Mars orbit, about now. We can see Mars with our eyes. Telescopes today can see in all spectrum over billions miles and hundredths of light years.

So, specifically what size is Elenin again; please be more specific than "Elenin has to be fairly small."

hotep_x said... Elenin has to be fairly small."

We can work it out roughly ourselves for what we know about planets and asteroids. We know that how bright a planet/asteroid/comet is is proportion to how far away they are from us and how dark/reflective they are.

At the Moment, Elenin and Mars are at roughly the same distance from Earth. Elenin is about magnitude 14, and Mars is magnitude 1.4. Mars is 6792 Km in diameter, so Elenin must be much smaller than Mars.

Again, Elenin is magnitude 14, over 15 times dimer again so it must be much smaller than Vesta. Scaling against the Mars to Vesta ratio, this means Elenin is roughly 20 Km in diameter by our back of the envelope calculations.

This is an over estimate, as Vesta placed at Mars's orbit will be a bit brighter than the figure we used here (and hence the calculated diameter of Elenin will be smaller).

Elenin has been measured to be between 3-4 Km in diameter (best estimate given the size of the telescopes and distance involved), so order of magnitude agreement with our quick and dirty estimate (the real relation between diameter, brightness and magnitude) is slightly more complex.

Nonetheless, we can, using just some simple rules of thumb, determine that Elenin "has to be fairly small"

Citizen Science - You Too Can Hunt for Exoplanets...
Twilight Total Lunar Eclipse Tuesday 21 December
About the Occultation of Eta Piscium...
My 2010 Geminids
More Images of 596 Scheila and its Coma
The Sky This Week - Thursday December 16 to Thursd...
Asteroid 596 Scheila has a cometary outburst.
Geminid Meteor shower, 14-15 December 2010
More 2010 B1 Cardinal images
Comet C2010 B1 near Do24