Eastern horizon as seen from Sydney at 8:30 pm AEDST on December 21. The Moon has risen in total eclipse, and as the twilight sky darkens, the shadow slips off the Moon.

On the evening of Tuesday, December 21, there will be a total eclipse of the Moon. Unfortunately, for Australians it will only be seen in North-Eastern Australia, with Queensland getting the best view, followed by New South Wales.

For both these sites, the Moon rises around the end of totality, with deeper immersion for Queensland, the better the farther north you are.

As the eclipsed Moon will rise in the twilight, the twilight will wash out the appearance of the eclipsed Moon. However, the Moon should appear dimmer than normal, and as it rises there should be a gradual brightening of the southern part of the Moon, more easily seen as the sky darkens. 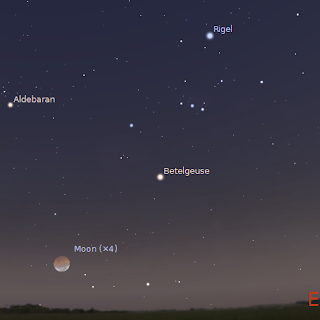 Eastern horizon as seen from Brisbane at 7:45 pm AEST on December 21. The Moon has risen in total eclipse.

By the time the sky is fully dark, the Earth's shadow will have slipped off the Moon (actually, the darker inner shadow, the Moon will still be in the outer shadow, but it will not be visible under these conditions).

In Melbourne and Adelaide, the Moon rises with the eclipse almost over, and only the thinnest sliver of the Moon in Earths shadow. Northern Territory and WA see nothing.

New Zealand sees an even better eclipse, with totality occurring closer to the end of twilight. The best views are in the Americas.

See here for a map and contact timings in UT for sites worldwide.

UPDATE: For the folks who have been googling "can i look directly at the lunar eclipse on tuesday the 21st 2010" the answer is yes, you can (It's solar eclipses you have to be careful with). 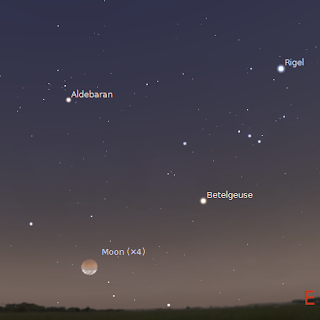 Eastern horizon as seen from Cairns at 7:45 pm AEST on December 21.

Comments:
i have heard that yhis lunar eclipse will take in conjunction with a solar eclipse.that would be great.

As it happens there will be a partial solar eclipse that will pass over Africa and Eurasia on the next New Moon, on January 4th. The Americas and Asia-Pacific won't see it.

So Western Australia doesnt see anything? I live in Perth ><

Heros: Nope, not a thing.