The First Quarter Moon is Tuesday August 17. Four of the 5 classic planets are visible together in the early evening sky. Mercury is prominent below these planets and is close to the crescent Moon on the 12th. Perseid meteor shower morning of 13th. The crescent Moon joins the triad of Venus, Mars and Saturn on the 13th. Comet Encke may be visible in binoculars near Mercury by the 17th. 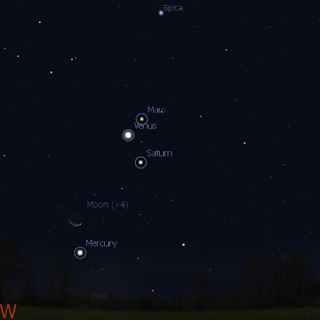 Evening sky looking North-west showing Mercury,Venus, Mars, Saturn and the crescent Moon at 7:00 pm local time on Thursday August 12. Click to embiggen.
The First Quarter Moon is Tuesday August 17. on the 12th the Moon visits Mercury, on the 13th it visits Venus, Saturn and Mars, on the 14th it is close to the star Spica and on the 17th it is in the head of Scorpius the Scorpion.
Jupiter rises before midnight, and can be readily seen from about 10 pm local time just above the eastern horizon.

The morning of Friday August 13 is the maximum of the Perseid meteor shower. Only observers north of Brisbane/Alice Springs will see any significant number of meteors. 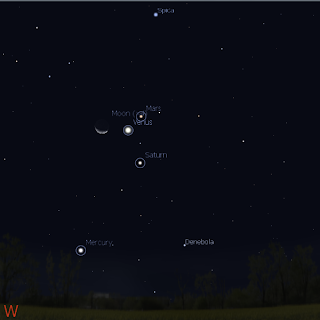 Evening sky looking North-west as seen from Adelaide at 7:00 pm on Friday August 13 showing Mercury below the massing of the Crescent Moon, Venus, Saturn, and Mars. Similar views will be seen elsewhere at the equivalent local time. Click to embiggen.

Four of the five classic planets can be seen together in the early evening sky making fantastic patterns.

Mercury can be seen above the western horizon from half an hour after sunset at the beginning of the week. It is now quite easy to see, just below the massing of Venus, Mars and Saturn. On the 12th the thin crescent Moon is not far from Mercury. At the end of the week Mercury and the comet 2P/Encke are within a binocular field of each other, but at magnitude 7 the comet may be difficult to spot low in the evening sky.

Bright white Venus is readily visible above the western horizon from half an hour after Sunset, (even before) until past the end of twilight (about an hour and a half after sunset). Venus is now in Virgo the Virgin, close to Mars and Saturn. On Friday August 13 Venus, Saturn, Mars and the crescent Moon are close together. During the week Venus comes closer to Mars and further form Saturn. By the end of the week Mars and Venus are close, and both are closing in on the bright star Spica.

In the evening Mars can be seen low in the north-western sky. Mars is above Venus, at the beginning of the week. Mars is distinguishable by its reddish colouring.

Saturn is easily visible in the western evening sky as the bright yellow object close to Venus. During the week Saturn and Venus draw apart. Telescopic observation of the ringed world is now difficult as Saturn sets earlier.

A Paper on Fructose and Cancer, it doesn't mean wh...
A Triangle in the Sky
On the Astronomy Trail in Copenhagen - The Rundetaarn
Carnival of Space #165 is here.
Massing of Venus, Saturn and Mars, August 8
National Science Week 14-22 August
Carnival of Space #164 is here.
Geomagnetic Storm Happening NOW!
The Sky This Week - Thursday August 5 to Thursday ...
How Many Earth-Like Worlds?