A Paper on Fructose and Cancer, it doesn't mean what you think it means

Over at Respectful Insolence Orac has discussed the misrepresentation of a study about the effect of fructose on pancreatic cancer. This post is a slightly expanded version of that comment, with some added diagrams and a bit more on fructose concentrations. The point is still that the press release (that limiting fructose intake may disrupt cancer growth), and some of the conclusions of the paper, are not justifyable from the data.

First, a little background. Sugar to most people is sucrose, or cane sugar. But actually "sugar" covers a large number of similar chemical compounds. Ones commonly encountered apart from sucrose include glucose and fructose (also known as fruit sugar as it is found in high concentrations in fruit, it is also found in honey). Indeed sucrose is glucose and fructose linked by a chemical bond. When you eat sucrose, enzymes in your gastrointestinal tract break it down into glucose and fructose, which are then absorbed (your body can absorb intact sucrose).

There is some concern that consumption of high levels of fructose may have negative health consequences above that of simply consuming more calories. People in the United States are particularly concerned as many of their soft drinks and foods are sweetened with High Fructose Corn Syrup (HFCS), as opposed to sucrose in most of the rest of the world (like Australia, where sugar cane fields are part of the national psyche). It should be pointed out that the proportion of fructose in honey is about the same as that in HFCS and some fruits (eg apples and pears) have significantly more. However, the large amount of extra sugar added to processed foods and soft drinks means we are be exposed to much higher concentrations of fructose (and glucose) than we would eating a diet of fresh fruit and vegetables.

In the study Orac talks about (Cancer Res; 70(15) August 1, 2010) the researchers were looking at whether fructose could support cancer cell growth.

Now in the paper there are two sets of results, one set on cancer cell proliferation, and one set on metabolism (seeing whether metabolic pathways involved in cancer growth were selectively activated by fructose). The authors show reasonably convincingly that fructose is preferentially metabolised to nucleic acids in pancreatic cancer cells, pancreatic cell models and hepatic cancer cells (with some caveats I will cover later[1]). However, what they say about the rate of cancer proliferation is almost, but not completely, dead wrong.

These findings show that cancer cells
can readily metabolize fructose to increase proliferation.

If you have access to the paper, look at Figure 1. If not, I've abstracted some of the key results in Figure 1 below, and added a line showing the control level of proliferation for clarity. 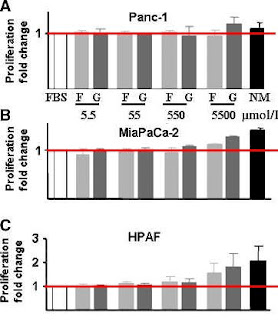 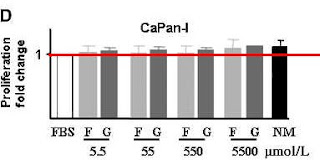 
The first important thing to note is that when they did the proliferation assays, they compared the results to cells cultured in 10% Foetal Bovine Serum alone - which contained *0.4 mmol/L glucose*[2] (FBS in the figure, open bar, the black bar is complete medium with 10% FCS and 18mmol/L gulcose) . This means at the lowest concentrations of additional sugar, they are comparing 400µM glucose + 5.5µM fructose vs 405.5µM glucose. Which kind of messes up their interpretation.

Looking at the graph (note the red line showing basal growth, and the error bars) Generally, glucose and fructose are the same...they don't do anything above and beyond the Foetal Bovine Serum control. Only in MiaPaCa-2's, HPAF and, possibly, HPDR6 do you see proliferation which MAY be statistically significant from the baseline proliferation at the highest concentrations used (400µM glucose + 5500µM fructose vs 5900µM glucose, they look higher, but the error bars are significantly bigger too). An important caveat is that for the MiaPaCa-2 cells, when proliferation was remeasured using a different assay (BrDU incorporation), fructose basically did nothing. So any apparent increase in proliferation may just be assay variation.

It's a bit hard to clearly work out what data points are statistically significant, if any, as their statistics are borked, badly borked. The legend to Figure 1 says "P = not significant, fructose versus glucose or normal medium (NM)." Which if correct, means that the proliferation rates at 5.5µM added sugar (glucose of fructose) is no different from the 18 mM glucose normal medium values, which makes their data uninterpretable (see Figure 1B and C particularly). No other stats tests on the proliferation data are presented anywhere.

So we should reformulate the statement of the abstract as "In some cancer cell line, 5 mM fructose and 5mM glucose might cause the same amount of proliferation above that found with 0.4 mmol/L glucose, if we could statistically distinguish them from the control" (actually, the best interpretation is that fructose and glucose did nothing to proliferation, if their presentation of the statistics is correct).

This is probably due to fructose being mainly taken up and metabolised in the liver, but the bottom line is that pancreatic tissue will never see any more than micromolar concentrations of fructose. Even if plasma levels of fructose from dietary sources reached 55 µM (which would be insanely unlikely), it would, on the basis of the results presented in the article (Cancer Res; 70(15) August 1, 2010) do absolutely nothing to cell proliferation (see Fig 1 again). The authors report that pancreatic cancer patients have 2.5 times the plasma levels of fructose of non-cancer patients, but that is still is 100 times less than the 5mM needed to see any difference in proliferation rate (assuming that the results are statistically significant, which they may not be).

There is one tissue that could be exposed to high levels of fructose, and that is the liver, which receives blood flow direct from the gut. However, even high levels of fructose ingestion (4g/kg; about 10 times what you would get from a can of soft drink) produce concentrations of fructose of no more than 1-2 mM in the portal blood (J Am Coll Nutr. 1986;5(5):443-50., Nutr Metab 1971;13:331-338 (DOI: 10.1159/000175352)), still well below the levels where we see some increase in proliferation of pancreatic cancer cells (well, assuming the results were statistically significant, which they may not be; the hepatic cancer cells were not examined for proliferation effects). Even then, the cells exposure at these high levels is brief, at most 2 hours, whereas in the experiments the cells were exposed for 48 hours. So even if you do drink 10 cans of soft drink at one sitting, your liver cells will be unlikely to be exposed to the proliferative levels of fructose.

Put simply, their results do not support their conclusions on prliferation.

1. While the data on metabolism is clear, again these results are in cells exposed to unphysiological concentrations of fructose for 72 hours. This is completely different from what the cells in your body would be exposed to.

2. It is very hard to get rid of glucose from FCS, and if you did the cells wouldn't grow (and actually die at 0 glucose). And you can't get rid of the FCS, for it contains growth factors the cells need to grow as well. Well, there are serum-free media with added growth factors, but they have their own problems. So there are limitations in how they can study this question. Most of my work is done in cancer cell lines (PC-12 and SHY-5Y amongst others, so I am acutely aware of both the strengths and limitations of tissue culture.

Comments:
Hi Ian,
My google alert for HFCS picked up your article.
It’s interesting that you compare the fructose:glucose ratio in
HFCS and honey.
HFCS-55 (used to sweeten beverages)
Fructose 55%
Glucose 45% F:G = 55/45 = 1.22

I firmly believe that it is the fructose>>glucose imbalance which is
making us obese and sick.

The CRA boldly claims that HFCS-55 is similar to sucrose.
In my opinion, that is patently misleading. The real F:G ratio,
1.22, means that in every American Coke there is, compared to glucose,
22% extra fructose.
What does this mean to the average teen who chugs a couple of sodas daily?
Drinking 5 HFCS-55 sweetened Cokes =
4.25 Sucrose sweetened Cokes + 0.75 Can of “pure fructose sweetened Coke”

I have yet to carefully read your analysis on the UCLA research- fructose vs. glucose and pancreatic cancer; however, I am fascinated by your contrast of circulating plasma fructose and glucose levels-- a thousand-fold difference. Perhaps this is simplistic, but maybe our bodies just don’t need fructose. And when assaulted with so much, via HFCS of any formula, whether it is to sweeten (soda), enhance the Maillard reaction (bread), prevent freezer burn (frozen dinners), or function as a preservative (cereal), the body
receives an extra bolus of free fructose it doesn’t need and the liver, the only organ capable of metabolizing fructose, has got to get rid of it. So it’s converted to adipose fat or to sludge and sent to our arteries, or it is excreted and we suffer all those GI disturbances like flatulence and bloating. Or it is degraded to uric acid and increases insulin resistance, paving the way to metabolic syndrome and type II diabetes.

We have been swimming in excess fructose since 1984 when Pepsi and Coke made the switch to HFCS-55. The corn chemists at Cargill and ADM knew what they doing; they designed the ratio. Why they chose a fructose rich brew is a matter of conjecture. I’ll bet that the HFCS-50 passed the sucrose like taste test, but
they wanted to make HFCS a little sweeter so 1. end manufacturers could use less, 2. in our fetish about calorie reduction— they could impart the same sweetness with fewer calories, or 3. perhaps they have their own lab rats and
they found out that a fructose rich brew is addictive.

Well, I guess you know which side of the fence I am on.
Thank you for your information and analysis.
Cynthia Papierniak, M.S.

Cynthia 1770 wrote: I have yet to carefully read your analysis on the UCLA research- fructose vs. glucose and pancreatic cancer; however, I am fascinated by your contrast of circulating plasma fructose and glucose levels-- a thousand-fold difference. Perhaps this is simplistic, but maybe our bodies just don’t need fructose.

In my post I point out that the low levels of fructose are a result of fructose being avidly taken up by the liver (and metabolised).

Our ciurrent epidemic of obesity is due to too many calories and not enough exercise. Australia, without HFCS, has high levels of obesity. Whatever you do, do not avoid fructose containing fresh fruit and vegetables.

Ian--good analysis. The values i find for fructose in human serum is a range form 50-300 uM. I also read the paper and agree the FCS makes it uninterpretable. Most if not all the fructose we eat is taken up and metabolized by the liver. Interestingly, studies have shown that its metabolized oxidatively and not via Glycolysis so its use is likely lipid synthesis and for nucleotide synthesis. It's also not clear that HFCS is signaificanly more fructose to be an issue. Its not clear to me that obesity is anything more than genetics (an important part for sure) and total calories consumed

Thank you Ian for this analysis.

I see it as a first step of an effort to solve a contradiction which baffles me. Ample evidence can be seen on Pubmed of the anti-cancerous properties of some fruits: cranberry watermelon papaya etc. How can they stop and induce cancer at the same time?

As a vegetarian cancer patient reading your paper was good!
Cheers {-:
edward

A Triangle in the Sky
On the Astronomy Trail in Copenhagen - The Rundetaarn
Carnival of Space #165 is here.
Massing of Venus, Saturn and Mars, August 8
National Science Week 14-22 August
Carnival of Space #164 is here.
Geomagnetic Storm Happening NOW!
The Sky This Week - Thursday August 5 to Thursday ...
How Many Earth-Like Worlds?
Southern Skywatch August 2010 edition is now up!