On the Astronomy Trail in Copenhagen - The Rundetaarn 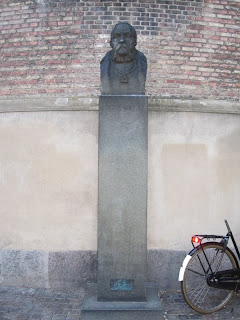 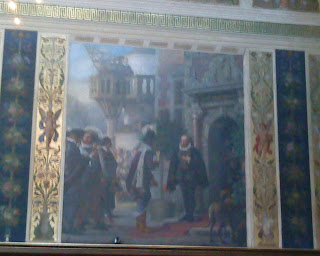 Left, a statue of Tycho Brahe (with nose), outside the Rundetaarn (Round Tower). Right, a painting in the University of Copenhagen main hall, showing Tycho Brahe receiving a Danish king (Fredrick II?) at his observatory in Copenhagen (the Watermill Tower).


Denmark has an important place in the history of astronomy, it's most famous astronomical son is Tycho Brahe, and his observatory at Uranienborg was a powerhouse of astronomical observation. Other famous astronomers in Denmark were Longomontanus (a collaborator with Brahe) and Rømer (who was the first to get a decent value for the speed of light). 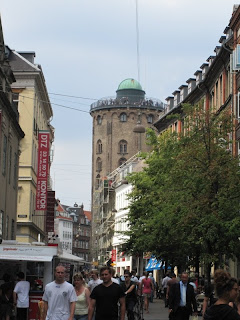 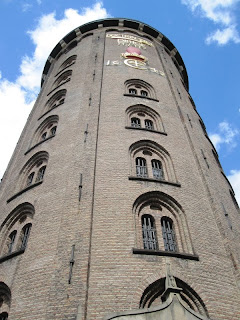 A highly visible sign of Denmark's astronomical history is the Rundetaarn, an observatory built between 1637 and 1642 by King Christian IV. Tycho Brahe had died well before its completion (1601), but was undoubtedly involved in it's getting it built in the first place.

Tycho's collaborator Longomontanus was the observatories first director. The left-hand image is a view of the Rundetaarn from downtown Copenhagen. The image on the right is a a more detailed view of the tower. With Christian IV's rebus on it in gold. The Rundetaarm had everything an astronomer needed, an excellent observatory, a first class library, a students church and not one but two privvies, one on the observatory level. When you have to climb hundreds of stairs and a wired winding ramp to go outside and get relief, and observatory level privvie is luxury indeed. 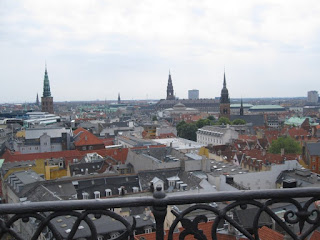 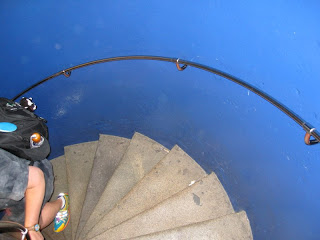 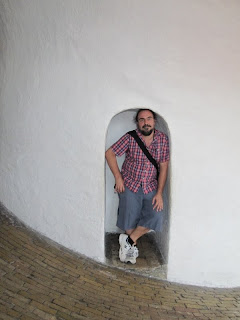 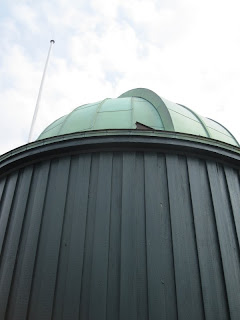 Left image, me in one of the little niches (who knows what they were used for) on the long, windy ramp to the steep windy stairs. Right image, the observatory dome on the top.

I wandered past the Rundetaarn several times while in Copenhagen, as it is in the heart of the old city between two big Metro stations, and as the Metro was under maintainance we often had to walk to the bus connection that was taking over the Metros duties, this walk took us past the Rundetaarn.

The first time I went past, I was stunned, as I had no idea this was here. The lead up to the conference was a little hectic, and I didn't investigate tourist possibilities before I ended up in the city itself. Of course, the first time I encountered it the tower was shutting for the night, and it was only at the end of the trip that I could get away from the conference early enough to get in and have a look (the conference ran from 8:30 am to 6:15 pm every day, and was chock full).

The experience was fascinating. If you used a bit of imagination, you could transport yourself back to the 1600's as an early astronomer, peering out over a torch-lit city. There were lots of hstorical documents to inspect on the way up too. A hint, when visiting the twoer DON'T try and climb it in high-heeled shoes. 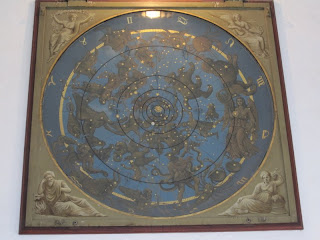 This is the planetarium mounted in the Rundetaarn.It only dates from 1928, but is a wonderful 3 dimensional model of the solar system as understood at that time (no Pluto).

It replaced an older one that was installed in 1740. This one showed both the Copernican sun-centric system along with Tycho's geocentric system. I wish the replacement had duplicated the original.

Interestingly, the Rundetaarn has an asteroid named after it, 55005 Rundetaarn.

Carnival of Space #165 is here.
Massing of Venus, Saturn and Mars, August 8
National Science Week 14-22 August
Carnival of Space #164 is here.
Geomagnetic Storm Happening NOW!
The Sky This Week - Thursday August 5 to Thursday ...
How Many Earth-Like Worlds?
Southern Skywatch August 2010 edition is now up!
More Images of the Line-up
The Line-Up Begins