The First Quarter Moon is Saturday June 19. Mercury is lost in the twilight glow. Venus is readily visible in the early evening. On June 17 the Moon and Mars are close. On June 19 Saturn and the Moon are close. On June 20 Venus is close to the Beehive cluster. Jupiter is prominent in the morning sky. On the 21st Earth is at Winter Solstice. 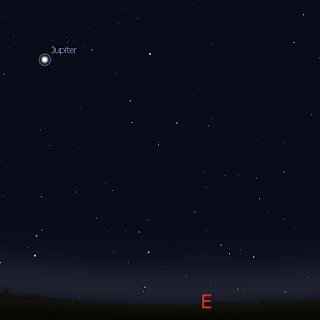 The morning sky facing north-east in Australia on Sunday June 20 at 4:30 am local time showing Jupiter.

Mercury is low in the morning sky and by the end of the week it is lost in the twilight.

Jupiter is clearly visible in the north-eastern sky as the brightest object in the early morning. Jupiter is now high enough for telescopic observation to be rewarding. Jupiter looks a little different now that one of its bands has disappeared. Jupiter and Uranus are close together and can be seen near each other in a pair of binoculars (spotters map here). 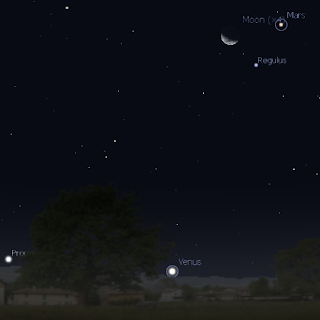 Bright white Venus is readily visible above the western horizon from half an hour after Sunset, (even before) until past the end of twilight (about an hour and a half after sunset). Venus starts the week in Cancer, forming a line with the bright stars Procyon an Sirius, and moves towards the Beehive cluster during the week. On the 20th and 21st Venus is close to the Beehive cluster, although you will need to observe this event in binoculars to see the Beehive without it being overwhelmed by Venus's light.

In the evening Mars can be seen low in the north-western sky. It has faded a lot, but is still the brightest (and clearly red) object in that part of the sky. Mars is to the right of Regulus, the bright star in Leo the lion at the beginning of the week and will draw away from it during the week. The waxing Moon, Mars and Regulus form a nice triangle on Thursday June 17.

Saturn is easily visible in the western evening sky as the bright yellow object between the bright stars Regulus and Spica, just up from Mars. Now is still a very good time for telescopic observation of the ringed world. Saturn is quite high in the sky for the best telescopic views at around 8 pm. Saturn's' rings are opening, and look quite beautiful, even in a small telescope. On the 18th of June, Saturns' Moon Titan cruises just below the planets south pole.

Earth is a Winter solstice, when the day is shortest, on June 21.

Venus near the Moon, June 15, 2010
The Biggest Obstacle to Astronomy after Clouds
And it Moves! Direct imaging of Beta Pictoris b as...
Carnival of Space #157 is here.
Update on the ISS Transit and Occultation
Occultation of the Pleiades, Friday June 11, 2010
The ISS passes in front of the Sun in Adelaide.
Comet C/2009 R1 McNaught is becoming bright(ish)
The Sky This Week - Thursday June 10 to Thursday ...
Animated Southern Cross