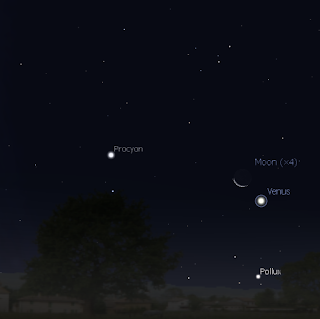 The evening of Tuesday 15th is enlivened by the thin crescent Moon being close to Venus. As the view develops as the twlight deepens, you will see the Moonshine begin to glow against the darkening night.

This is a good opportunity to see Venus in daylight. You must be very careful to make sure you don't look directly at the Sun though. Hide the Sun behind a large object such as a wall or building when looking for Venus. The Moon is around 6 handspans from the Sun, but it is rather thin, and will be hard to see. You way want to try about an hour before sunset to give it your best chance to see the Moon. When you find the Moon, Venus will be seen as a bright dot just below.

Comments:
I saw the moon and Venus from Hobart and it was great. What is the significance of why the moon was close to Venus-is there an explanation?

the moon symbolizes our subconsciousness and Venus our expectations. When the new moon and Venus are this close, our suppressed expectations with regards to work, relationships and our life's goals become apparent. We are given the opportunity to acknowledge and act upon them.The way to rid ourselves of expectations is to fulfill the wishes of the people around us.

No significance per se. The Moon and planets all lie roughly in the same orbital plane, so as the Moon orbits the Earth it will pass objects near the plane of its orbit (The Moon advances about 15 degrees every night as it orbits the earth).

The combined orbit of the Moon (and the slight wobbles in the Moons orbit), the orbit of the Earth and for the planets, their movement in orbit, means that sometimes the Moon will be close to these objects during any given month (Venus is close to the Moon on 15 July, 13 August and 11 September for example). Tonight Mars, the Moon and Regulus are close.

The Biggest Obstacle to Astronomy after Clouds
And it Moves! Direct imaging of Beta Pictoris b as...
Carnival of Space #157 is here.
Update on the ISS Transit and Occultation
Occultation of the Pleiades, Friday June 11, 2010
The ISS passes in front of the Sun in Adelaide.
Comet C/2009 R1 McNaught is becoming bright(ish)
The Sky This Week - Thursday June 10 to Thursday ...
Animated Southern Cross
Mars and Regulus are close!