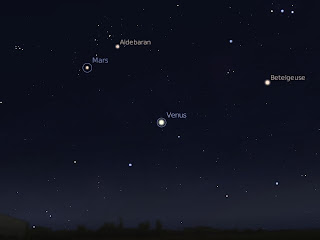 Saturn is visible in the early evening and can be easily seen as the second brightest object above the north-western horizon but now sets around 9:00 pm local time.

Jupiter is easily seen as the brightest object above the eastern horizon from around 10 pm local time. Jupiter's Moons are readily
visible in binoculars or a small telescope.

In the morning, Venus and Mars are readily visible in the eastern sky. Red Mars is not far from
the beautiful Pleaides cluster, near the A-shaped Hyades cluster, which forms the head of Taurus the Bull. Between Thursday July 23 and Sunday July 26 Mars is close to bright red Aldebaran in the Hyades, forming a second red "eye" for the Bull (see image above) . Bright white Venus is well below Aldebaran, and is close to the star that forms the tip of the
Bulls right horn. The combination of Mars and Venus makes the constellation more Bull -like, although Venus does not properly get into position until Tuesday July 28. 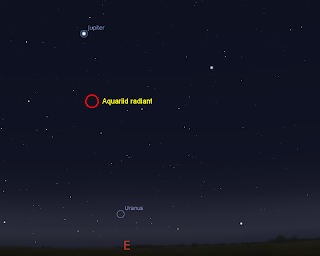 Eastern horizon around 11 pm local time July 28. The red circle shows the location of the apparent origin of the Aquariid meteors (the radiant). Click to embiggen.

On Tuesday July 28- Wednesday 29 the Aquariid meteor shower peaks. People in the suburbs should see a meteor around once every 6 minutes, and in the country about once every 3 minutes, from between 1 am to 3 am on July 29. The apparent origin of the meteors is about two handspans east of Jupiter, so if you look in the direction of Jupiter (the brightest object in the sky at that time) you should have a good view. Use the NASA meteor shower flux estimator to see what the shower will be like from your location. You need to choose 5 South. Delta Aquariids and remember to set the date to 28-29 July 2009.

Carnival of Space #112 is here.
Something Goes Crash on Jupiter
Where were You When People First Walked on the Moo...
A Splendid Line-up
The LRO photographs the Apollo Landers
Another Double Moon.
Let the Moon Be Your Guide!
The Sky This Week - Thursday July 16 to Thursday J...
"Unscientific America" and the case of Pluto
Podcast for Festival of Ideas now Up