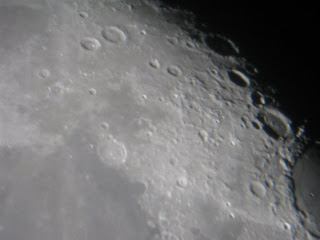 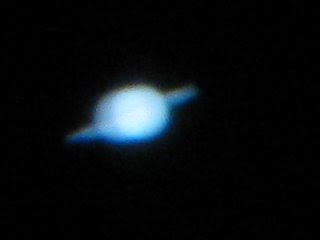 It turns out I did far more astronomy over Easter than I had thought. Some of our Melbourne cousins came over, and the boys (well Young Adults and their Dad) were really interested. They got me to get out my telescope a couple of times.

The first night we were standing under the stars as the car was unpacked, when the Hubble Space Telescope and another satellite went over us close together. The next night I set up the Don, the 8" reflector, and we spent most of the night watching Saturn. Unlike the Earth Hour star party, the sky conditions were almost perfect, Saturn was beautiful and crisp, and not only could we see Titan, we could see Rhe and (just) Dione. I tried out a variety of lenses and Barlow combinations for the folks, and had a constant stream of people wanting to look. Well, Saturn IS fabulous, and the boys and adults just couldn't get enough.

Two nights later we did the Telescope thing again. Again Saturn was crisp, and this time Titan and Rhea were relatively close together, with Dione (just) visible on the other side. The Moon was just enough past full for there to be enough Luna craters to be worthwhile. Again, everyone was entranced by this, and EldestMaleNephew now has an image of the Moon on his mobile phone. The images above were all taken with my Canon IXUS "point and shoot" camera held up to the lens. Not bad really.

The Cousins are now back in Melbourne, and our boys miss their boys. We all had an excellent Easter, and had some good Astronomy to go with it. What adventures will we have next Easter?

We have just added your latest post "Easter Astronomy" to our Directory of Science . You can check the inclusion of the post here . We are delighted to invite you to submit all your future posts to the directory and get a huge base of visitors to your website.