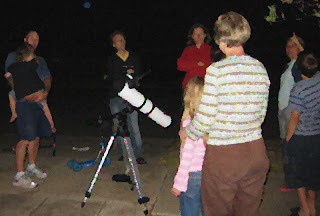 We invited some friends over for Earth Hour, and I set my small telescope up on the footpath just outside our house to do some footpath astronomy. In the end we only garnered the next door neighbours though. I had set up the 4" on Saturn. I was also going to set up to little 50 mm refractor, but the objectives were nowhere to be found.

People lined up to look at Saturn, and kept on looking. Eventually, after much adjusting of the scopes position. I dragged out the 8" with the drive and set that up.

Why didn't I set that up first? As I was running a bit late due to time overruns on cooking the lentil burgers, I didn't want to violate the spirit of Earth Hour by having the lights on as I navigated the massive scope through our narrow doors to out front. In the end someone with a massive torch helped guide me outside. I set the 8"scope up with a 12 mm eyepeice and a 2x barlow and left it on Saturn, where it was continually watched by a steady stream of participants. We couldn't see Titian's shadow, but we couldn't see Titan at all until late into the night, even though we could pick up Dione and Tethys. The small scope was then relegated to Orion's nebula, the Eta Carina complex and double stars.

By the time we had packed everything away, it was 11:30 pm! We had gone well beyond the "hour" of Earth Hour (and no, I didn't notice any diminution of sky glow), and everyone enjoyed themselves.

Some brief rules for a footpath astronomy star party, for what I learned that night.

1) Make sure you have all your telescopes set up well before hand, having at least two scopes really helps or one object will monopolise your time.

3) Set your gear up on a foot path which will have some traffic on it, rather than just outside your house on a very quite street.

4) Make sure you have the scope eyepiece orientated for ease of use, especially by younger participants. Always have a small stool with you so they can stand on it.

5) Make sure your finder scope really is aligned before you set things up, or most of the night will be people watching you struggle to get something into the field of view.

6) If you are doing satellite watching, make sure you are checking your "glow in the dark" watch frequently, or you will completely miss them.

Comments:
This article has been added to the Astronomy Link List.aphosew

Globe at Night Extended
Earth Hour - Time for Some Astronomy
Ockty the Octopus
Titan Shadow Transit, 28 March 2009
High School Students Photograph the Edge of Space
Carnival of Space #95 is here.
The Moon and Jupiter, 23 March 2009
When Comet Al tells you it's in Pisces, its in Pisces
Jupiter's Moons in Stereo
Is this an L4 asteroid?