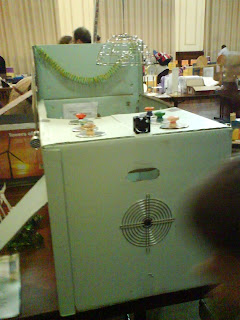 So we hung out with the cousins today, then went and saw my niece's entry in the SASTA Oliphant Science Awards (SASTA being the South Australian Science Teachers Association). The Oliphant Science Awards are for School Projects, which are on display this week as part of Science Week. There were inventions, models, constructions posters, software and essays. The standard was pretty high, some of the posters were outstanding. One of the clear themes in the projects was a concern for the environment, there were solar power and water saving projects aplenty.

There were also plenty of solar system projects and a few rockets. I asked middle one if he wanted to go into the competition next year as a rocket makers, but I don't think he was impressed with the idea.

The image here was the entry from my niece's group (shes in reception/kindergarten). It's a model of a time machine, with flashing lights and working air conditioning. I think it's great!

Comments:
my patner and i made a time machine too.and we wanted to know how to improve it....could anyone possibly help us if so poast another comment we'll look for it tomorrow thank you.

10TH National Science Week Begins!
Waiting for Venus
Carnival of Space 16 has been constructed
Mars and the Pleiades Again
Parallax Regained, Asteroids in Stereo
Venus and the Moon, Tuesday evening
Mars, Pleiades and Hyades
Science Alive! at Science Week
ISS and STS-118 in the morning
The 15th Carnival of Space Lifts Off