No, the mRNA vaccines do not increase your risk of Acute Coronary Syndrome

Anti-vaccinationists have been promoting an abstract of a poster to be presented at the forthcoming American Heart Association meeting as A) a peer-reviewed publication (it's not, conference poster abstracts are not peer-reviewed in any meaningful sense, and it is flagged with an expression of concern) and B) demonstrating significant heart inflammation which increases cardiac risk. The abstract states:
We conclude that the mRNA vacs dramatically increase inflammation on the endothelium and T cell infiltration of cardiac muscle and may account for the observations of increased thrombosis, cardiomyopathy, and other vascular events following vaccination. 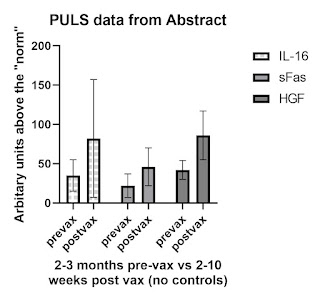 Except well.. it doesn't. (EDIT: I have now seen the poster, it's even worse than I thought, see below)
I graphed the data from the abstract, it doesn't support the claims, basically, the inflammatory markers are not elevated. Look at the error bars, they are very wide and overlap substantially between pre- and post- vax measures, which means there is no meaningful difference between the figures, indeed for IL-16 there is a possibility that the real postvax value is actually lower than prevax).
The PULS test (Protein Unstable Lesion Signature Test, mistyped as PLUS in the abstract, the author couldn't even get the name of the test he used right), measures a panel of 9 proteins associated with atherosclerotic plaques, including proteins related to inflammation, apoptosis, thrombosis and vascular remodeling (IL-16, sFas, Fas ligand, HGF, HDL, Eotaxin, MCP-3, CTACK and HbA1c, don't worry about what all the abbreviations mean) as well as things like blood pressure and cholesterol levels to predict the likelihood of a cardiac event (from rupture of a blood vessel in the heart to clotting, etc.).
I could find no independent validation of this test (one site that sells this test claimed 61% predictive utility for any cardiac event, not that good even for the intended use. A similar test, the CHDRA algorithm, has been tested and is somewhat better than the Framingham risk score in predicting 5 year risk of cardiac events but again incorporates a lot more data than just the panel of 9 proteins (and is still only moderately better than tossing a coin).
Importantly the CHDRA algorithm is meant to weigh long term risk factors against the risk of cardiac events, not transient changes associated with infection or vaccination.
However, note that only 3 of the 9 proteins in the CHDRA panel are reported, not enough to calculate a coronary risk score.  Furthermore, there is no actual data shown (eg. IL-16 is normally reported in ng/Litre or pg/mL), just an arbitrary "elevation above the norm". There is no indication of how the "normal" baseline is determined (what is population the "norm was based on? how many subjects, what was their health status? what age and sex distribution?). Are they using an average value or the upper limit of the reference range (however derived)?
There is no indication of inter-test variability (ie how variable is the data from a the same subject taken three months apart, is the variation shown just the normal variability of the populations?). Normal changes over time not controlled for, there is no group of similarly aged people who have not been vaccinated tested over the same time interval. 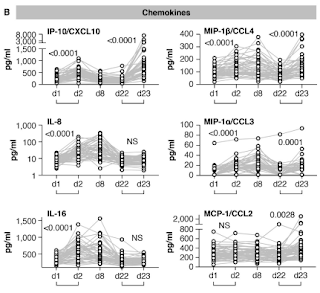 Detail from Figure 2B of this paper looking at inflammatory markers after injection with the Pfizer vaccine.
Then again, it's not like finding inflammatory markers 2-10 days after a vaccination which induces inflammation is a surprise.  We already knew that.
If you look at the panel to the left you can see that IL-16 is elevated on days 2 and 8 after vaccination and returns to baseline by day 22. That the PULS test results in the abstract can't even show this clearly shows how rubbish the study is.
The data not only fail to show a consistent increase in the 3 of 9 biomarkers they picked, they also show no evidence of endothelial inflammation (IL-16 is produced by many cells, including lymphocytes that would be expected to be activated by vaccines (or infection) let along T-cell infiltration of cardiac muscle (that's basically made up).
And they get the side effects of the vaccine wrong.  Thrombosis with Thrombocytopenia is a (very rare) side effect of the adenovirus vaccines not the mRNA vaccines. Myocarditis is a rare side effect of the mRNA vaccines, hard to distinguish from the background rate in the population, and COVID-19 produces about 4 times the rate of myocarditis as seen with the vaccine.
Take home message: While we might expect to see some inflammation after vaccination, this abstract can't even show that, let alone show it has anything to do with the heart. In short, it is nonsense.
EDIT: I have now seen the poster, it's worse. The poster is basically the abstract with two panels showing data reports from patients. The data is already in a transformed state, reported as a "%event rate ratio", with no indication of how you get from pg/ml IL-16 to an event rate ratio and then get to an "above the norm" figure with no units. Patient 1's data is identical pre and post-vaccine with the same ACS risk. Patient 2 has the same risk rations pre and post, despite having a different profile AND Patient 2's ACS risk is identical to patient 1's. Furthermore, both Patient 1 and Patient 2 reports were generated at exactly the same date and time, which is ... unlikely.
The only "evidence" for T-cell infiltration of cardiac tissue is the marginally elevated HGF score, which is probably not statistically significant. But HGF (Hepatocyte Growth Factor) is elevated in a range of inflammatory states (eg pancreatitis) and says nothing about T-cell infiltration of cardiac tissue in and of itself.
Revised Take Home Message: Still nonsense.

Comments:
Lot of nonsense going on.
In my country the head of infection control said before vaccination that if the 85% goal was reached, we would develop herd immunity.
It turned out that the vaccine was not working.
We were then told that the purpose of vaccinations was never to achieve herd immunity but to keep the severity of the disease to a minimum.
We are now at the highest point of infection rate of the Delta variety and the third injection.
And if infection rates go down after the third injection (of course they will go down) then Covid vaccination will be mandated.

It doesn't mean there is no meaningful difference between the figures. There is a significant difference, and to claim there's possibility that the real postvax value is actually lower than prevax is intellectually dishonest.

We don't work with possibilities in these studies, but probabilities. You should know that.

While there's a possibility that the real postvax value is lower than prevax, the probability of that being the case is very, very low. The probability of postvax being higher on the other hand is very high. Your own graph shows that.

It does mean there is no meaningful difference, and while the chance that the value of the post vax average being lower is small, the probability of it really being higher is also small. With the current data and the huge error bars, the only possible takeaway is that there is no meaningful difference. I have now seen the full poster, it is worse than I thought and the values presented on the poster are uninterpretable.

Dr. Gundry is a retired cardiothoracic surgeon who was widely recognized as one of the world's foremost experts in heart surgery for almost three decades.
He contributed vastly to the field of medicine with his inventions - The Gundry Lateral Tunnel, The Skoosh Venous Cannula, and Gundry Ministernomy. the Medtronic Gundry Retrograde Cardioplegia Cannula, and the Medtronic Gundry Retrograde Cardioplegia Cannula, the most widely used device of its kind worldwide to protect the heart during open-heart surgery.
Founder of the Center for Restorative Medicine
Medical director for the International Heart & Lung Institute
Dr. Gundry was a founding board member and treasurer of the International Society of Minimally Invasive Cardiothoracic Surgery
Sat on the Board of Directors of the American Society of Artificial Internal Organs
Served two terms as president of the American Heart Association's Desert Division Board of Directors
Currently a Fellow of the American College of Surgeons, American College of Cardiology, American Surgical Association, American Academy of Pediatrics, and College of Chest Physicians.
Dr. Gundry started his career in 1985 when he joined Loma Linda University School of Medicine as a Professor of Surgery and Pediatrics. In due course of time, he became the Chairman and Head of Cardiothoracic Surgery.[9] During his time there, Dr. Gundry performed maximum infant and pediatric heart transplants than anyone else in the world
Named one of America’s Top Doctors for 21 years in a row by Castle Connolly, an independent physician rating company
Named Top Palm Springs Life Top Doctors for 15 years in a row
Named Top Los Angeles Magazine’s Top Doctors for the past six years
Four-time New York Times bestselling author
During his 40-year career in medicine, he has performed over 10,000 heart surgeries and developed life-saving medical technology.

Regardless of what he did in the past, the data speaks for itself, it is pure nonsense which does not support the claims made in the abstract. The actual poster is worse.

Fas and HGF are also both associated with the immune system :facepalm:

Yes, basically any inflammatory response will send them up. Your know what *really* sends up HGF? SATS-CoV-2 infection. https://pubmed.ncbi.nlm.nih.gov/34373466/
And increased HGF from prior influenza immunization protects against subsequent COVID infection https://journals.plos.org/plospathogens/article?id=10.1371/journal.ppat.1009928

Re "I have now seen the poster" : where ? Please provide a link to the poster.

Some of it is hilarious.


None of what I have done addresses what you have addressed.

Ian has mentioned twice about the poster, asked once to provide the link to the poster.
So Ian, could you please provide us the link?

The link to the poster is in the very first sentence of the post (you will have to be subscribed to the conference to access the full poster). There is a video of the presentation you might find helpful https://twitter.com/i/status/1464368064850370560