Thursday May 27 to Thursday June 3

The Last Quarter Moon is Wednesday, June 2. Saturn and Jupiter are visible late in the evening sky and are visited by the waning Moon from the 30th to the 1st. Venus and Mercury are visible in the evening twilight and are close together on the 29th, low in the twilight. 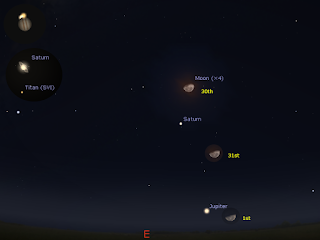 Evening sky from Sunday, May 29 to Tuesday June 1 showing the eastern sky as seen from Adelaide at 23:45 pm ACST (just before midnight). Saturn and Jupiter form a line in the late evening sky being visited by the Moon.
The insets shows the telescopic views of Jupiter and Saturn on June 1. The Jovian Moons Callisto and Io will go have just appeared from behind Jupiter's disk.
Similar views will be seen elsewhere in Australia at the equivalent local time (just before midnight), click to embiggen. 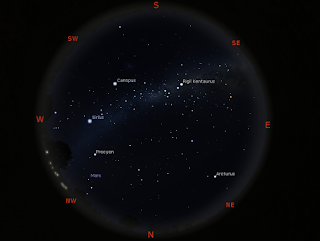 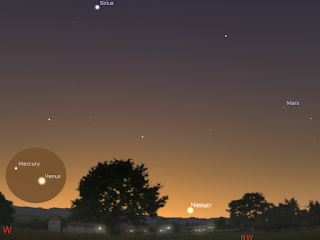 Evening twilight sky on Saturday May 29 looking north-west as seen from Adelaide at 17:41 ACST (30 minutes after sunset). Venus is just above the horizon with Mercury just next to it. You will need a clear level horizon to see Venus and Mercury and probably binoculars to see Mercury. The inset shows the approximate binocular view of Venus and Mercury.


Similar views will be seen throughout Australia at the equivalent local time (30 minutes after sunset, click to embiggen). 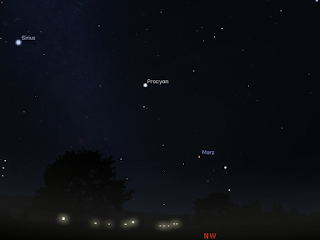 Evening sky at 18:43 ACST (90 minutes after sunset), on Monday May 24 facing north-west as seen from Adelaide.
Mars is low above the horizon near the bright star Pollux.

Similar views will be seen elsewhere in Australia at the equivalent local time
Mercury is visible low in the evening twilight. Best seen from half an hour  after sunset with a level, unobstructed horizon. It is less than a finger-width from Venus on the 29th.

Venus is becoming more visible low in the twilight.  I have been able to see Venus from 15 minutes after sunset and it will be much easier to see this week.