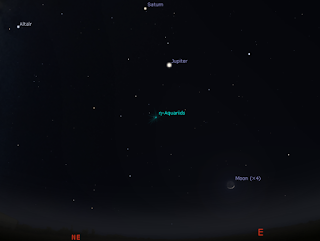 The north-eastern Horizon as seen from Adelaide at 4:30 am ACST, the eta Aquariid radiant is marked with a starburst. Similar views will be seen elsewhere in Australia at the equivalent local time (click to embiggen).
The eta Aquariid meteor shower, which is produced by the debris from Halley’s Comet, will peak on May 6, 03hUT, which is sadly after sunrise on May 6.
Despite this, and interference from the light of the waning Moon which will be very close to the radiant, we will have worthwhile rates on the weekend mornings of May 8 and May 9, from 3:00 AM to 5:00 AM local time Australia-wide, where people with dark skies should see a meteor around every three to four minutes.


While the peak is on the morning of the 6th during daylight, the peak is really broad and viewing from the 7-9 will give you decent rates (see table below). Based on the NASA meteor flux program (see below) and my own excel spreadsheet using Jennisken's eta Aquariid stream parameters the best rates will be seen from Australia on the mornings of the 8th and 9th (see table below, but the 7th is very worthwhile too, even the 10th if the other nights are clouded out, as you can see the rate difference between the nights is fairly marginal).

The waning Moon is very close to the radiant on the 6th and the 7th, even on the 8th and 9th the crescent Moon’s light will have an effect so try and find a position to watch the meteors where the Moon is blocked from view,

People in the suburbs should see a meteor around once every 6 minutes, and in the country about once every 3 minutes. The radiant of the shower is about five hand-spans up from the eastern horizon, and three hand-spans to the left of due east at 4 am (see spotter chart at 4:30 am above).

In practice, you will never see this many meteors as the radiant will be some distance below the zenith. Also, unless you are out deep in the countryside, the darkness will be less than ideal. How many are you likely to see in reality?

The table below gives predictions below for various towns, but they are only predictions and while based on average steam density there may be some differences year to year, but good rates were seen in previous years, and dark sky sites may possibly see one meteor every 4-5 minutes or so. There were many bright ones reported with persistent trains in 2014. People in the suburbs maybe will see less, but at least one every 6 minutes should be possible.

Predicted meteor rates for selected towns (taken from NASA shower Flux estimator below). If your city is not on the list you can expect a meteor rate similar to the closest city to you in latitude.

Don't look directly at the radiant site, because the meteors will often start their "burn" some distance from it, but around a hand-span up or to the side. The best way to watch the Eta Aquariids is to let your eye rove around the entire patch of the sky above the north-east horizon, between the only two obvious bright stars in the northeast, Altair and Fomalhaut, and Jupiter and Saturn as the centre of your field (again, see the spotter chart at 4:30 am above).

Make yourself comfortable, choose an observing site that has little to obstruct the eastern horizon, have a comfortable chair to sit in (a banana lounger is best), or blankets and pillows. Rug up against the cold.  A hot Thermos of something to drink and plenty of mosquito protection will complete your observing preparations. As well as meteors, keep an eye out for satellites (see Heavens Above for predictions from your site).  The Milky way will arch above you, with Jupiter and Saturn just above te radiant. 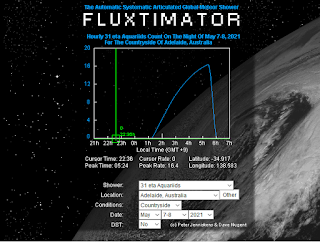 You need to choose 31 Eta Aquariids and remember to set the date to  7-8 or 8-9 May 2021 and turn off daylight saving time. You can follow the progress of the shower at the IMO live Aquariid site.

Comments:
Excellent blog, Will be on the case this AM. Thanks,
Chris from Mt Barker.