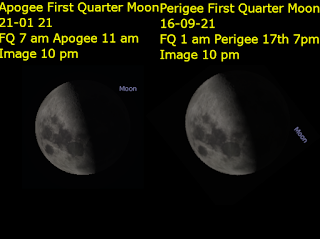 Because the Moons orbit is elliptical, there are times when it is  furthest from the Earth (apogee) and closest to the Earth (perigee). At these time the Moon is different in size as seen from Earth, the difference is subtle to the unaided eye, but readily seen in binoculars or telescope.

Until recently most people didn't give perigee and apogee Moons a second thought, but after they were invoked in some pseudoscience waffle, they were co-opted by the astronomical community to get people more interested in the sky, with perigee Full Moons becoming "Super" Moons.

Of course, the "Super Moon" (and "mini" apogee moon)  focuses on the really obvious full Moon, but the other moon phase can occur at perigee and apogee too. Of course you can't see either a perigee or apogee new Moon (unless there is a total Solar Eclipse or annular solar eclipse from an apogee New Moon) and no one want's to get up at Dark O'Clock to see a Last Quarter Perigee or apogee Moon. But first Quarter?

Last quarter Moons are relatively high in the sky at sunset, so you don't have to wait a while for the moon to get high enough to dispel the Moon Illusion so you don't confuse the illusion with the Moon's true size. Also, unlike the full moon, where there are no shadows and everything is a bit bland (if beautiful). 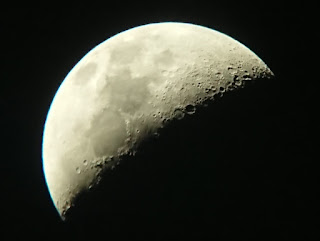 But the First Quarter Moon is more dramatic, with the shadows of the terminator bringing out the walls of the craters and the mountain peaks. Of course this is not all visible to the unaided eye, but in binoculars or even a small telescope the view is beautiful and reveals the size difference between the apogee and perigee Moon more easily.

This year the First Quarter Perigee is a bit over a day and a half after First Quarter 16th and 17th August), but still not bad, and apogee and First Quarter is only 13 hours apart (upcoming at 21 January). Next year the pairing is March 10 apogee, November 1 perigee.