The Full Moon is Thursday December 12, the Last Quarter Moon is Thursday December 19.  Saturn is above Jupiter and Venus in the western evening skies at the beginning of the week.Venus climbs even higher in the evening twilight leaving Saturn behind.  This is the last week to see Jupiter before it disappears in the evening twilight.  Mars and Mercury visible in the morning twilight. Bright star Betelgeuse dims. Geminid meteor shower morning 15th. 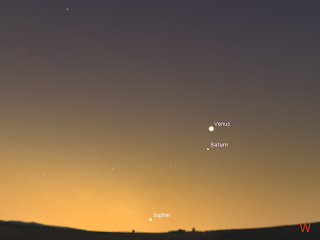 Sky at 20:53 ACDST on Saturday December 14 (30 minutes after sunset) looking west as seen from Adelaide. Venus is above Saturn and Jupiter is just above the horizon. 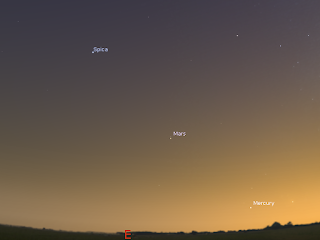 Morning sky at 5:26 ACDST facing east as seen from Adelaide on Friday 13 December 30 minutes before sunrise. 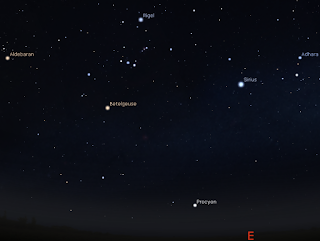 However now it has been reported that Betelgeuse has dimmed substantially, to a 25 year low (even though it is still bright to us). It is well worth keeping an eye on it, to see if it dims further. What the dimming means is not clear, but Betelgeuse will be an interesting object over the coming month. 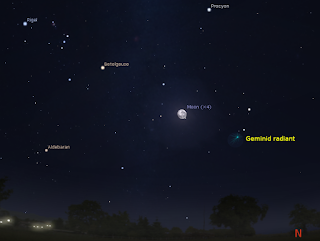 The Geminids are normally a fairly reliable meteor shower, with rates of about a meteor per minute at their best.

This is a poor year for Geminids, as the Full Moon is almost on top of the radiant. The radiant doesn't rise until just before midnight (daylight saving time) in most of Australia, so you will have to disturb your sleep for this one. At 1.00 am in the morning AEDST (midnight, AEST) Castor (alpha Geminorum) is about two hand-spans above the horizon and 10 hand-spans to the left of due north. Pollux, the other twin, is less than a hand-span to the left again. The radiant is just below Castor. Australians should see a meteor every 12 minutes under dark skies in the early morning of the 15th, between 2:00 am and 4:00 am.


Venus is higher above the western horizon in the late evening twilight. Venus is now readily seen up to 90 minutes after sunset.Venus leaves Saturn behind over the week.

Jupiter   is barely visible low in the western twilight below Saturn and Venus. Jupiter sets around 45 minutes after sunset. This is the final week to see Jupiter before it disappears in the twilight glow.

Mars is visible in the morning twilight  above Mercury. It is closest to the second brightest star in Libra, Zubenelgenubi, on the 13th.

Saturn  is above Jupiter and below Venus and near the "handle" of the "teapot of Sagittarius.