The Full Moon is Monday October 14. The Moon is at apogee, when it is furthest form the Earth, on the 11th. 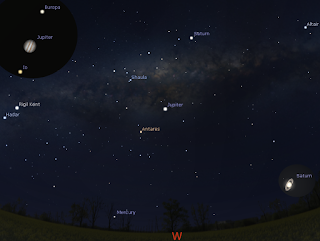 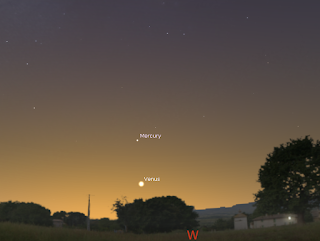 The western horizon at 20:54 Saturday 12 October (30 minutes after sunset) as seen from Adelaide. Mercury and Venus are now clearly visible above the horizon .

Similar views will be seen elsewhere in Australia 30 minutes after sunset, click to embiggen. 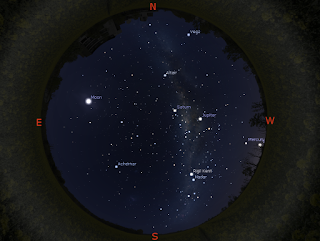 The whole sky at 20:23 ACST on Saturday 12 October. (60 minutes after sunset) as seen from Adelaide. All 4 bright planets and Antares form a line in the evening sky.

Similar views will be seen elsewhere in Australia at the equivalent local time (30 minutes after sunset), click to embiggen.

Mercury is climbing higher above the western horizon in the evening twilight as is visible for at least an hour after sunset..