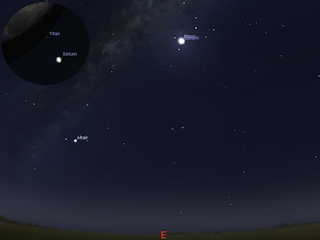 The Moon at 18:16 pm AEST in Brisbane on Thursday 12 August just as Saturn disappears behind the Moon.

On the evening of Monday 12 August Saturn is occulted by the waxing Moon as seen from eastern Australia north of Canberra.