On the evening of Monday 12 August Saturn is occulted by the waxing Moon as seen from eastern Australia north of Canberra.

Although the east coast gets a good look, the best views are from New Zealand and Polynesia, everyone else misses out.

The Moon, above the eastern horizon, is a very obvious signpost for where to look. From most locations the occultation starts between nautical and astronomical twilight, although Saturn may be harder to spot visually it should be readily visible in telescopes and binoculars.

In some locations the Moon titan is occulted first, but will be much harder to see in the twilight (Brisbane 18:08, Canberra 18:32, Sydney, 18:25). For timings of Titan disappearances and Saturn grazes from NZ and Australia, see here. 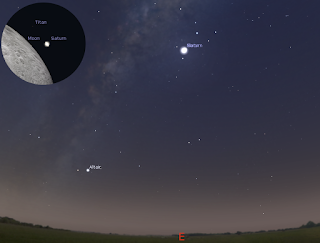 The Moon at 18:15 pm AEST in Adelaide (about 45 minutes after sunset) on Thursday 12 August as Saturn is closest to the Moon, twilight will make seeing Saturn more challenging. (click to embiggen).

Start watching about half an hour beforehand to get set up and familiar with the sky. Saturn will disappear behind the dark limb of the Moon at a reasonable height for telescopic observation.

Reappearance will be harder to see as you have to be looking just at the right moment.


More cities in Australia and New Zealand cities can be found at the IOTA site (UT times only).